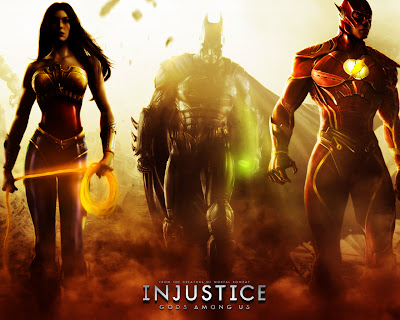 I'm at GameStop on Monday to buy a new game called "Injustice: Gods Among Us."  Although, I'm not nearly the gamer than I was a decade ago, I still get games from time-to-time to play my god son.

As I get ready to cash out, the guy asked me if I was a GameSpot Rewards member.  I was a member, but mainly because the guy was so pushy the last time that I bought a game for my god son that I decided to do it.  Besides, if I can save a few bucks now and then, then I guess it's not such a bad thing.

I didn't like the fact that the guy shop-shamed me into buying it, but I figured that I would make my money back on it.  What is shop-shaming?  That's when someone tries to guilt you into buying something you don't need or they try to upgrade a purchase into something that you don't need.

I didn't think much of what he did before (basically hounding me to get the Rewards card at $14/annually), but, like I said, I figured it would pay for itself.  However, the same guy took things way too far this time with his pushiness...

Him: Okay.  Two things you'll need with that...

Him: You'll need the strategy guide ($25), which I can give you $5 off of today, and you'll need the Season Pass ($15) which will give you access to new costumes and arenas.

Me: No, thanks.  I just want to pre-order the game.

Him: Maybe you don't understand.  The strategy guide is $5 off and you will definitely need it.

Me: I don't use strategy guides.  That's cheating, if you ask me.

Him: (obviously offended, dude scoffs) I beg to differ, sir.  But, with the Season Pass, it allows you to have access to all of the additional downloadable content thus saving you roughly $40 if you bought it on Xbox Live.

Me: No, thanks.  I don't need all of that.  I don't care about extra costumes.

Him: (rolling his eyes and sighing in disgust) You're really doing yourself a disservice, but I'll go ahead and give you what you want.  You're going to need those things though.

By this time I was clearly agitated and was on the verge of walking out, but luckily he stopped talking.  He actually seemed offended that I didn't want all of those extras that come with the game.  Dude, I'm not as into the games as you are, so why are you coming down on me for not wanting Wonder Woman's extra suit and stuff?  Really?

I know that salespeople have a rough job, but don't try and shame someone into buying something.  I was the only customer in the store at that time, but I'm sure that the conversation would have been a lot different had someone else been present.  Because if someone else would have been there, I would have been much more defensive and soon on the offensive with my responses.

Who would have thought that I would be a victim of shop-shaming at GameStop?  Geesh!


Have you ever been shop-shamed?

(Also, today would have been the 11th wedding anniversary for me and The Mrs.  Unfortunately, she passed away last year after a nine year battle with breast cancer.  I still miss you and will always love you, Bre.)
at 9:00 AM
Email ThisBlogThis!Share to TwitterShare to FacebookShare to Pinterest
Labels: gaming, rude, salesperson, shame
undefined Jackson, MS, USA