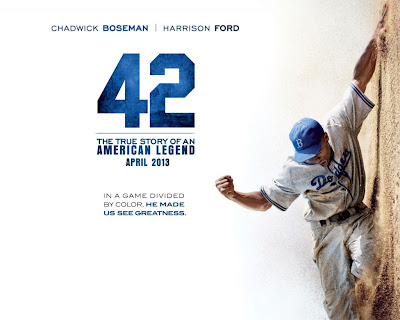 I recently saw the movie based on Jackie Robinson's life, "42."  For those born under rocks, Robinson is credited with breaking the color barrier in America's Game, Major League Baseball.  Now, I'm not one to do movie reviews, but this movie was so important to me, that I felt compelled to blog about it.  I grew up a Los Angeles Dodgers fan in the 70's, not even knowing what Jackie had done as a Brooklyn Dodger in the 40's.  In fact, I was almost in my teens before I really knew the story of Jackie Robinson.

I'm not going to literally break down plots or spoilers of the movie, but I do want to discuss what the movie represents: "42," written and directed by Brian Helgeland, didn't simply present the movie as a focus on Robinson's life.  He presented the movie from multiple perspectives so that anyone could appreciate it.  "42" isn't black history, it's American history.

If you go to see this movie, and I hope that you will, then be prepared to pay close attention to everything.  Not just what Jackie went through, but how it affected everyone around him from family to teammates.  By the time the two hours and eight minutes are up in this film, you will have experienced the following:


Now, that's saying a lot, but that's exactly what I got out of this movie and more.  Will the movie win an award?  Well, Harrison Ford wasn't too shabby and may be considered for an Oscar.  Chadwick Boseman was great as Jackie Robinson and Nicole Beharie was flawless as his wife, Rachel.  My longshot to win an award is the sportswriter, Wendell Smith, played by Andre Holland.  I truly enjoyed his role in the movie.

Jackie's life didn't just change baseball.  It changed the country, just as a lot of historical moments in sports have.  We may not have seen Arthur Ashe or Tiger Woods had it not been for Jackie Robinson.  Sure, someone would have broken into those sports, but it may not have been them.  It may have come later had Robinson not already set the stage. 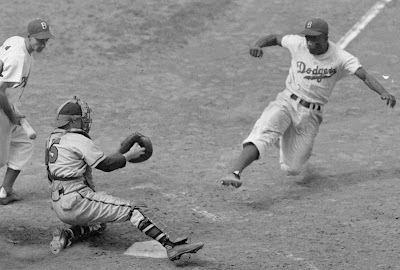 In fact, one reason I'm not a fan of Tiger Woods to this day is because of Jackie Robinson.  Back in 1997, Tiger was invited to be the speaker at the 50th Anniversary of Robinson breaking the color barrier in Major League Baseball.  President Bill Clinton invited Tiger to attend the event with Jackie's widow, Rachel, and be the guest speaker.  Tiger refused because he was going on vacation with his friends.

Jackie Robinson was the difference between Tiger Woods putting on grass instead of cutting the grass.

Reread that sentence again and think about it for a second.  Robinson paved the way for people like Tiger and to me, nothing short of Armageddon should have prevented Woods from standing on that podium next to Rachel Robinson and honoring the man who set the standard.  Tiger can play in a white man's sport and win an event, which is ironically called "The Masters," because Jackie opened the door.  In fact, Tiger had won The Masters just two days before the Robinson anniversary.  The timing would have been perfect.  But, he was "tired" and wanted to relax.  For that, I will forever smile when he loses a Major event on the PGA Tour.

I have a poster of Jackie Robinson that will go up in my man cave as soon as the frame arrives for it.  I'm not a new fan of Robinson.  I've had his jersey for as long as I can remember.  But, this movie not only made me a bigger fan of his, but it rekindled my affection for baseball as well.  A sport that I'd left for dead after the 1994 strike.

Jackie Robinson became much more than a player.  He became a hero.  He became an icon.  He became a source of inspiration.  America can still be a great country if we simply had some people brave enough to spark change.  That includes removing the teaching of racism in this country.  Pee Wee Reese, Jackie's teammate, once told him that, "maybe someday, everyone will wear number 42 so that we can't tell each other apart."

He never knew those words would be prophetic.