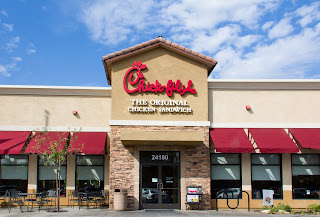 Before you say anything, no, I haven't completely lost my mind just yet.  I know that the title seems a little crazy, but hopefully, I can convey my point without someone committing me to a mental institution.

Maybe I should have said that "relationships are like fast food restaurants that sell chicken sandwiches".  Meh, that doesn't really flow off of the tongue.

Anyway, let's take Chick-fil-A.  By no means is CFA what I would consider a "sexy" fast food restaurant.  Their restaurants are on the conservative side with no flashy colors or logos.  They don't do gimmicks in order to get your attention, but they keep a line of cars around the building in their drive-thrus.  They attract their customers with consistency, great customer service, and solid food.  They don't open on Sundays because they believe people should have a day off with family.  I guess that makes them thoughtful as well and also shows that they don't focus on money.

Now let's take a look at Popeyes.  Like CFA, they focus on chicken, but at one time they weren't really known for having a chicken sandwich like CFA.  In the late summer of 2019, they released a chicken sandwich that took the country by storm.  People were lining up around the block for this chicken sandwich.  There were even fights over it.  They'd finally achieved the attention that CFA was getting.

But, it was temporary because they still didn't focus on the customer.  You didn't get the same friendly service as CFA.  They would run out of food in the middle of the day due to lack of preparation.  You would sometimes wait 30+ minutes to get your food.

Popeyes had figured out a way that they could get you, but they couldn't keep you.  And because of that, there are no longer lines around the building to get a Popeyes chicken sandwich.  Their success was short-lived.

Now McDonald's, Burger King, and even Taco Bell have joined the chicken sandwich war to try and get a piece of the action.  Really Taco Bell?  I won't even get into any of those places. 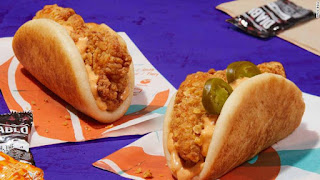 Okay, so I said all of that to say: people seem to follow the same path when it comes to relationships.  You have the consistent, always-friendly and reliable person who is just like Chick-fil-A.  You know exactly what you're going to get when you deal with that person.  They may not be the flashiest or the sexiest pick, but they will always come through for you and give you what you need.  Because you are their focus.  You are their priority.

Then you have the person like Popeyes who hits you like a ton of bricks when you first meet them.  Everyone seems to want a piece of them.  They look the part and sound the part at first, but then you find out over time that they're not all that.  They're inconsistent.  They take you for granted and seem to act like they're doing you a favor.  And they're definitely not focused on you or your happiness.

Lastly, you have the people who are like McDonald's, BK, and Taco Bell.  Monkey-see, monkey-do.  They will do whatever they can just to be noticed although most people will leave from them with a bad taste in their mouth.

Okay, maybe I do need to be committed to a mental institution.  SMH.