Why I Think Ayesha Curry Was Dead Wrong

Tonight is Game 7 of the NBA Finals and very few are actually talking about the game itself.  Just about everyone has spent the last few days discussing what Ayesha Curry tweeted about Game 6.

Mrs. Curry essentially insinuated that the NBA is"fixed" to allow Cleveland to extend the series to a Game 7.  A 7th game brings about more money through TV ratings and ticket sells.

As much as I love the Curry family and how they represent themselves, I think that she crossed over the line with her tweet.  Way over the line.

However, let me backtrack a bit.  Since the creation of the "Basketball Wives" TV show, it appears to me that a lot of women have come to the forefront of the game.  My only problem is with the ones who are bringing that reality show element along with them.  Sports fans honestly don't care what you think, good or bad.  We want to see Skip Bayless, Jemele Hill, Stephen A. Smith, and the likes discuss the game.  Not the wives of players.

Because wives of players are always going to side with their husbands.  Duh.  Where's the journalistic integrity of that (not to say that all talking heads on ESPN have integrity).  Brent Grimes of the NFL has a wife who is so outspoken that he has difficulty even signing with a team.  Imagine that!  Not being able to get a job because of your wife's actions on social media (and in real life for Miko Grimes).


And I want all the people who are supporting Ayesha to think about that.  If your husband comes home and discloses to you that someone at his job is holding him back, is your first thought to go on social media and bash his company?  Absolutely not.  Because you know that he will be out of a job if you do.

So, why do you give Ayesha Curry a pass on doing the exact same thing?  Because Steph is too talented to get fired from the Warriors?  Well, that's true, but that doesn't make it right.  Because believe it or not, Steph has been totally impacted in a negative way by his wife's antics.  He will never say that publicly because it's his wife.  Duh again.  But she's done more harm than good.

It's Game 7 and what who are we talking about?  Ayesha Curry.

Who are the reporters asking Steph Curry about in the interviews leading up to the game?  Not Lebron, but Ayesha.

What questions are Steph's teammates getting asked about in interviews leading up to the game?  Not about the Cavaliers, but about if they think the games are rigged. 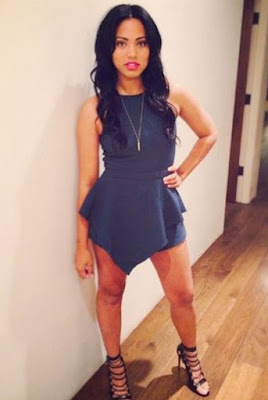 And if the tweet was not enough, she challenged an ESPN talking head legend in Stephen A. Smith into a war of words.  He called her out on being a distraction to the team and her response was to challenge what he said and be even more of a distraction.  She even said that Stephen A. was pitting women against women simply because he stated that Lebron's wife, Savannah, experiences much more scrutiny of her husband than anyone in the league, yet she lets him handle it.  Imagine that.  A woman letting a man fight his own battles.  I would personally be offended if I had a wife who attempted to fight my battles for me.  That's emasculating.  It's just not right and it's humiliating.

Steph Curry is going into what could be the biggest game of his career and no one is really talking about the game.  And even if Ayesha Curry is correct in her accusations, how is she going to prove it?  What if she pissed the referees off so much (they're human) that they decide that they're not going to call many fouls tonight?  They may decide just to let the guys play it out and stay out of the picture.  A physical game favors Cleveland and not Golden State, so that would hurt her husband's chances of winning.  How is her tweet going to help her husband tonight? 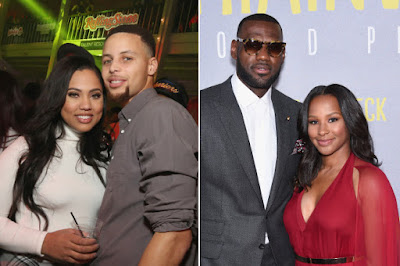 I'm not a fan of either team, but I do hope that tonight's game is a close one and has plenty of action.  I am a fan of both Savannah and Ayesha.  I'm a fan of Savannah's for being able to stay away from the spotlight, as tempting as it may be.  And I'm a fan of Ayesha's for how she's handled the spotlight, up until now.

It's not that Ayesha isn't entitled to her opinions.  She just has to realize that once she becomes the story, she becomes a target for criticism.  It doesn't matter if it's justified or not.  That's just how the media works.  And any criticism of her affects her husband's game whether anyone believes it or not.  It also puts him in a bad place with his teammates who also are affected by the controversy.

Ayesha will probably have her own cooking show or something in the future.  She's a likeable person and she has the ability to brighten up any room.  She's one of the more positive recognizable figures in social media today and we need more like her.

But tweets can't beat microphones.  In a game between Ayesha Curry vs. ESPN, I'm putting my money down on ESPN every time.  I hope that she now realizes that she's fighting a losing battle and that she takes the high road going forward. 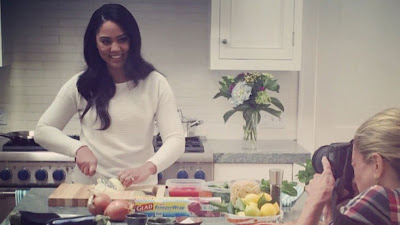 The Greatest of All-Time Has Left Us #Ali 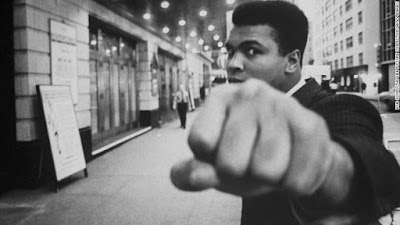 I had fallen asleep on my couch with my TV on ESPN.  However, I woke up and noticed a mural on the left hand side of the screen showing Muhammad Ali's face.  Before my eyes could adjust and focus on the words on the screen, I knew that Ali had died.  I'd just spoken to my cousin about Ali just hours ago about how grave his condition was.

My first "favorite athlete",  Muhammad Ali, was dead at the age of 74 years old.

There aren't many men like Ali being produced in this country any more.  Now, don't get me wrong.  He had his issues when it came to his wives.  He wasn't perfect.  But he did more for this country than anyone who may have stepped foot on the White House lawn in the past 50 years.

Ali had a relationship with the media that we will never see again.  He gave interviews that resembled stand up comedy sets.  The beneficiary of many of those interviews was a sports commentator named Howard Cosell.

Cosell and Ali were partners.  They fed off of each other in their interviews to become two of the biggest figures in sports.  The respect that they had for one another provided entertainment for more than a decade.  Despite their close relationship, Cosell remained unbiased in his journalist approach unlike what we see with some talking heads today.

Ali won many awards and honors during and long after his boxing career.  I won't go through all of his accomplishments because the talking heads will do that over the next week.  However, I will mention his impact on today's culture.  Ali started a culture of brashness that we see in sports today.  This was a man who not only showed you in the ring that he was "The Greatest", he would tell you that he was, too.  The predictions that athletes make today, the "getting in the head" of their opponents, and things like that were made famous by Ali.


He embraced his blackness and his message resonated throughout black communities around the country.  He stood for his beliefs regardless of the controversies and criticisms that surrounded him which is something athletes refuse to do today.  Ali didn't care if you liked him.  He didn't care if he lost money from losing fans.  Heck, he didn't even care if he went to jail for what he believed.

Ali was diagnosed with Parkinson's disease in 1984 and it slowly robbed him of all of the gifts that he'd displayed for us over the previous 25 years prior to that.  If he only had the opportunity to continue speaking, what would his contributions to black communities and to his religion would have meant to society today?

Would he have put black athletes and celebrities in their place when it came to their selfishness?  Would he have continued to inspire people to do more with their lives and not be ordinary?  What would Ali have given us had his voice not been trapped inside of his body?

We will never know.  The first athletic entertainer is gone.  A lot of people speculated that Ali was in a bad place this time around as we got word that he was being hospitalized.  Over the course of 24 hours, we all knew that his condition was getting worse and that he may be passing on.  Despite that being the fact, it still feels like a body punch to the gut to wake up and find out that my favorite athlete is gone.