Is A Piece Of A Dad Better Than No Dad At All? 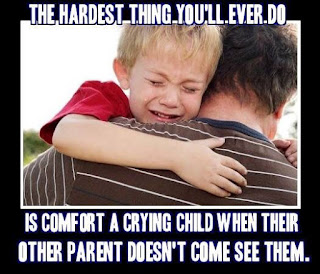 Singer, Betty Wright, once famously said that, "a piece of a man is better than no man at all."

That quote may make sense within the right context, but how about this one: is "a piece of a dad better than no dad at all?"

So often, I've encountered women who appear to be going at it alone. Single moms who find themselves trying to take care of their children and maintain a certain standard of a lifestyle on top of that.  Of course, not all women who say that they do it by themselves actually do so. There are a lot of cases where there's a man in the background helping out. However, I want to focus on the dads who aren't there consistently.

Is a part-time dad better than no dad at all when it comes to the well-being of the children and the stress levels of the mother?

I know quite a few mothers who are struggling financially because their children's father won't help consistently, if at all. But, he does just enough to help from time-to-time.  He may contribute towards back-to-school shopping.  He may pick the kids up now and then to give the mom a much-needed break and some alone time.  Since she's not taking him to court to for steady and mandatory support payments then he's perfectly fine with their arrangement of being able to come and go and he pleases.  Rather than alienating him and forcing him away from good, some of these women tolerate his inconsistencies and continue to make ends meet the best way possible. This not only has an impact on the mom's stress level, but it can also affect the children, and it can also impact any relationship that the mother may attempt to have with a new guy.

Is it worth it?  To have the baby's dad pick his child up every other weekend or give $100 every few weeks worth not putting him on child support and potentially losing any additional actions on his part?

I'm not a single mom, so of course I haven't a clue of what they're going through. However, I've worked with and dated quite a few of them and to say that this acceptance of a piece of a man doesn't have any negative impact whatsoever would be a fairy tale.

I've found myself in position to play dad when it comes to discipline as well as financial assistance. I once even had a woman get upset with me for not helping her financially because I insisted that she asked her child's dad first. We weren't even dating yet she was holding my feet to the fire because she couldn't rely on her baby's dad.

Where do you stand on this? Should a mother always seek child support to secure her kid's prosperity and risk upsetting the dad? Or should she just take what she can get and deal with any shortcomings on her own?
at 2:18 PM No comments:
Email ThisBlogThis!Share to TwitterShare to FacebookShare to Pinterest
Labels: baby daddy, child support, parenting, single parenting, women
undefined Jackson, MS, USA
Newer Posts Older Posts Home
Subscribe to: Posts (Atom)