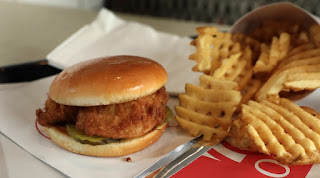 I read an article today about how a Chick-fil-A restaurant in the UK will be shutting down after its 6 months lease is up.  It's their very first location there and I'm unsure of if there will be others any time soon.

The restaurant opened in early October 2019 and has faced heat from an LGBTQ rights group calling out CFA for its previous financial support of anti-LGBTQ groups like The Fellowship of Christian Athletes and the Paul Anderson Youth Home.  The pressure was great enough to get the Oracle Shopping Center to not renew its lease with CFA.

CFA faces scrutiny on a regular basis from LGBTQ groups for their previous actions yet they are still the 3rd largest U.S. restaurant when it comes to sales.  They're just behind Starbucks and McDonald's.

Will it hurt a company that has earned billions or will it hurt those who lose their jobs when the company closes?

CFA gets over 20,000 inquires per year from franchise candidates.  They open 70-80 new restaurants annually.  Those restaurants bring jobs and tax money to the communities they service.

How people handle discrimination is completely their prerogative as long as it's legal.  I'm just playing devil's advocate here and I have two questions because I want to know how people feel about this:

Who does the boycott really hurt?  The huge company or its employees?

Are you anti-LGBTQ if you patronize or work at Chick-fil-A?

What's going on, people?  Long time, no blog, huh?  Well, I'm still around.  I won't lie and say that I've been busy because I haven't.  I've just been doing my thing and enjoying life.  There has been so much to blog about over the past few months, but I just haven't felt the need to put the fingers to the keyboard.  Part of it is due to the way society reacts to things now.

An opinion is no longer something people appreciate.  To some, it's a slap in the face and I don't get that.  Why is it that people just can't agree to disagree any more?  Why is it that folks are expected to be sworn enemies for life simply because of differences in their mindset?

Just recently, people were going off on Ellen Degeneres for being cool with President George W. Bush.  Just because Bush's ideologies don't align with hers she can't enjoy his company per society.  That's absolutely ridiculous!  That's the equivalent of not being someone's friend because they root for a different sports team than you do.

So, after some soul searching, I've decided to continue doing my thing here at Thank, Q.  And if someone I'm cool with disapproves of something that hits home, then so be it.  Nino Brown once said, "It's always business.  Never personal."

I don't write these things with anyone in mind (normally).  I just try to continue my role as a "life referee" and calls things like I see 'em!
at 10:36 AM No comments:
Email ThisBlogThis!Share to TwitterShare to FacebookShare to Pinterest
Labels: offended, opinions, sensitive, society
undefined Jackson, MS, USA
Newer Posts Older Posts Home
Subscribe to: Posts (Atom)