I know you're staring at that title and wondering if I've officially lost my mind.

Maybe. I was on the Yahoo! homepage and I noticed some "news" stories about one or two reality shows and it gave me an idea: I'm going to write a reality show idea about bloggers and pitch it to FOX!

It will be called: The Real Blogger Shore's Amazing Undercover Idol! (Did I hit every major reality show title in that?)  Basically, it's about some stereotypical bloggers who are stashed in a posh mansion in Helena, Montana. Why Helena? Because the mansions there are cheaper to rent than Beverly Hills. We're on a budget, you know? Now, stay with me.

This show will be very similar to MTV's "The Real World" which some people call the first traditional reality show. Like "TRW," you need an interesting blend of characters to sell the show. Here are my list of bloggers to join the mansion:

Bob (Squatlo Rant) is the show host. He'll give us the assignments and will be the person to announce the eliminations. How would we be eliminated? Each week, readers would vote on who is getting on their nerves the most.

Falen (Colorful Rants) is the drunk, bitter black chick. Every reality show has a bitter black woman. I think it's a requirement.  Anyway, she doesn't want to be bothered with anyone or anything. She hates being in the house, but she wants her beer and the couch.

Lynn (Thoughts of a Randomista) would be the resident flirt. Always speaking exactly what's on her mind no matter if it's appropriate or not. If it comes up, it comes out. This ideology also kick-starts most of the arguments amongst the house members.

Brandon (My Own Private Idaho) is the edgy one of the group. He always cracks the jokes that make everyone cringe. He's forever pushing the envelope with the ladies.

Sonia (LogAllot) is always full of advice, yet no one ever listens to her. Whenever the group is given an assignment, she takes the lead and spends the rest of the day trying to get everyone else to pay attention.

Michelle (Rantings of the Reckmonster) is always looking to froth (look the word up). She is volatile and is quick to swing on someone at the bar or in the club and have everyone in the group at the local police department for most of the night.

Michelle W (Mommy Confessions) just wants to go home. She hates being away from her family and spends all day talking about how much she regrets joining the show.

Alexandra (the Tsaritsa sez) is the free spirit. Whenever there's a group assignment, she's always straying away from the pack to take photos of herself or shopping for art.  She basically just enjoys the all-expense paid stay in a mansion and chooses not to contribute.

Me? I'm the cynical black guy! Duh!!! I'm the self-proclaimed know-it-all who thinks he can solve everyone's problem with sarcastic answers.  I just want everyone to get along although I'm secretly entertained by the drama.

With Bob hosting, we have eight contestants and four bedrooms.
How would you pair off the group to get the most volatile and interesting show? 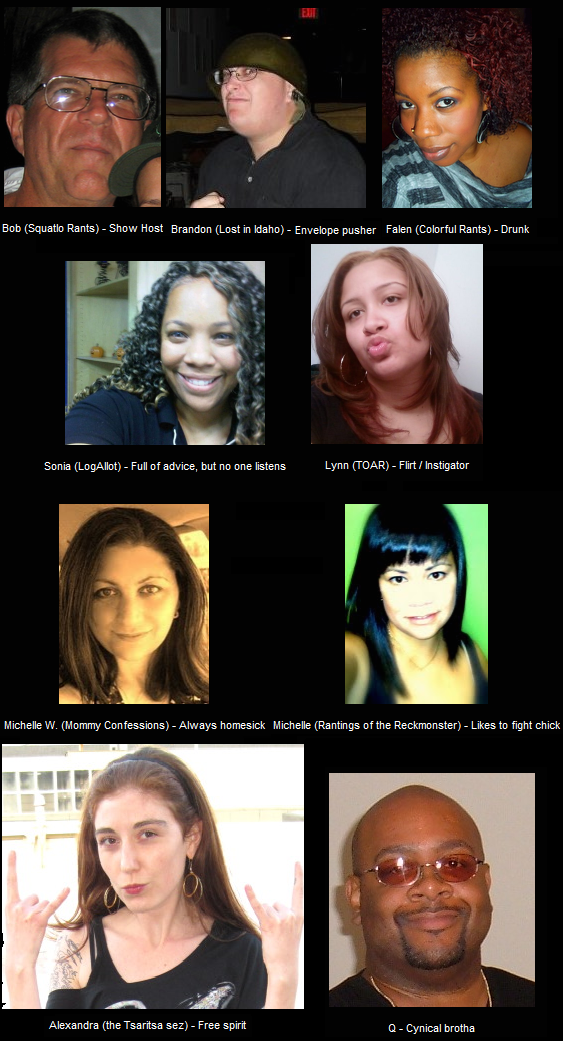 Click below to start the first chapter of the most creative and craziest story ever told!
Squatlo Rant: The Real Blogger Shores Amazing Undercover Idol: Part I

I know you're staring at this post and wondering if I've officially lost my mind. I got through a lot of trouble just to feature a few bloggers that I like, huh? Check them out and click on all of their ads at least 25 times. It has so been ordered.
at 8:27 PM
Email ThisBlogThis!Share to TwitterShare to FacebookShare to Pinterest
Labels: blog stalking, jersey shore, reality shows