The Double Standards of Sex

Check out the opinions of this group of people and comment with your conclusion.

To Bonnet Or Not To Bonnet? 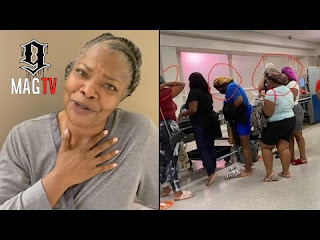 ...That is the question!
Well, it's not a question in my mind.  I flat-out hate seeing people out in public with bonnets on.  Then again, I guess it doesn't bother me as much if it's late at night and I'm in the grocery store at 11 PM, but people at the airport?  C'mon now.
I understand that things happen and sometimes women have to "run out" to the store quickly and get something.  Rather than taking the time to do their hair, throw on a wig, wear a cap or something they grab the bonnet and make their way to the store.
However, I'm not talking about those women.  I'm talking about the women who literally travel in bonnets or wear them on a regular basis.
What happened to representation?  What happened to trying to always look your best whenever possible?
And when comedian, Mo'nique, tried to advise women of how classless it looks to regularly wear bonnets in public, she gets slammed.  Now, it didn't help that she was in a house robe when she shot the video, but old school generations are on some "do as I say and not as I do" stuff.
She talked about instilling pride and dignity back into women and got dragged for it.  I honestly think that she was just trying to help and social media abused her for having an opinion on how women can improve themselves.
There's not a shortage of women on social media telling other ladies "know your worth" or "he ain't good enough for you" and things of that nature, but let a woman challenge other women to improve upon themselves and she will get canceled or muted.  Apparently, it's a violation to give a woman constructive criticism or the hard truth these days.  You'll regret it if you try.
Look.  Wearing a bonnet doesn't make a woman a bad person.  That's not what anyone is saying.  But perception is reality, like it or not.  If you choose to look as if you were too lazy to do your hair then don't get mad when people assume that you are in fact a lazy person.
If I wear a clown suit to the airport then guess what people will assume?
at 2:46 PM 2 comments:
Email ThisBlogThis!Share to TwitterShare to FacebookShare to Pinterest
Labels: airport, bonnets, cancel culture, constructive criticism, lazy, mo'nique, tough love, women
Newer Posts Older Posts Home
Subscribe to: Posts (Atom)