Lessons in Accountability from a 12-Year Old 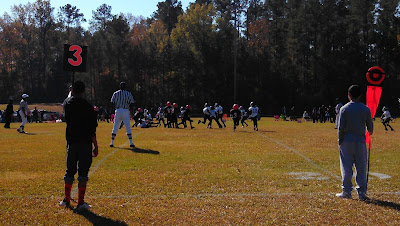 I was at my god son's football game last Monday. On their only touchdown play, he was called for holding and the penalty resulted in nullifying the TD.

He was taken out of the game and the coach talked to him about what happened.  His body language on the sidelines showed that he was angry with himself.  After the game, he was visibly upset and said that he "let the team down."

Words can't express how proud that I was to hear him say that.  This is a 12-year old thinking about his team when most adults can only think about themselves.

Take a lesson from a 12-year old playing a game and make sure that you're accountable for your actions.

My god son may have gotten a penalty, but he's still my MVP.
at 10:08 AM 1 comment:
Email ThisBlogThis!Share to TwitterShare to FacebookShare to Pinterest
Labels: accountability, football, kids, life lessons
undefined Jackson, MS, USA

There's An Art to Complaining

I'm sitting at a place called Upton Tire Pro.  They do different automotive services from tire replacements to oil changes.  I'm using their waiting room computer right now.  I like to write when I'm here because I can usually get up to an hour of uninterrupted writing.

I come here regularly, but I have had my run-ins with the company.  They haven't always called me when my vehicle was ready and they've completely forgotten my car being parked out front on two occasions. However, they do good work and they're convenient to my home, so I continue to go (for now).

Today there is a man who has come to the counter on three separate occasions to complain about something.  He's a mid-50's white guy with frizzy hair and what appears to be a nasty cold.

He first complained about how the company's website timed out on him while trying to book an appointment for an oil change.  In fact, I heard that story three times as he repeated it to the people in the waiting room.

He then complained about how he wasn't feeling well, but decided to come up here anyway.  He figured that he could get an oil change and tire rotation on a Monday because Mondays "aren't busy."  What exactly he's basing that on I have no idea.  Every business is busy on a Monday these days.

As this guy is complaining, I'm sitting over here typing and hoping that he doesn't look over my shoulder to see this.  His whiny and pathetic sounding voice is funny and sad at the same time.  I don't know whether to fall out of my chair laughing or give him a hug and some chicken noodle soup.  Either way, I can tell that the employees are sick of him.

30 minutes pass and Mr. Sniffles approaches the front desk once again and says, "what's the purpose of getting an appointment if you're not going to work on the car?  My car hasn't moved."

I actually agree with his point, but still, there aren't too many places that are on-time for appointments aside from movie theaters.  He asks for his keys because he's "sick and didn't want to come in the first place."

The employee doesn't say a word and hands him his keys.  The man repeats his story from Chapter 1 about the appointment system not working, the fact that he's sick, and how appointments mean nothing at Upton Tire Pro to the employee who is looking down at her computer and ignoring him.  Afterwards, he turns and leaves as the room quietly watches.

I have nothing against complaining, but there's an art to it.  Some people are really good at it while others suck.  This guy fits into the "suck" category.  You can't effectively complain if you're annoying.  And the consensus in the waiting room based on the convo that occurred after dude left was that he was annoying.

In my opinion, complaining only works if you can get the other person to respond to what you're saying.  Asking questions that force them to show their incompetence by answering usually does the trick!  You have to establish guilt in order to have something done about it.  Making them hate you isn't going to amount to anything being done to resolve your issue.  Well, that's unless the employee actually cares.  And where can you find an employee like that outside of Chick-Fil-A?

At least he helped me pass the time.  They're just getting to my 2:00 PM appointment at 2:39 PM.  Oh, well.  I kinda know that goes with the territory with most garages.  All you can do is grin and bear it or start changing your own oil.
at 12:00 PM No comments:
Email ThisBlogThis!Share to TwitterShare to FacebookShare to Pinterest
Labels: annoying, complaint, customer service, garage, upton tire pro
undefined Madison, MS, USA

Affection is Better Than Perfection

She's 5'2" and curvy in all of the right places.  As a matter of fact, she looks like the number 8 in high heels.  Her lips would make a lollipop shed a tear of joy from anticipation.  Full and soft to the touch.  Her hair is soft, silky and shoulder length.  Her cat-like hazel eyes can mesmerize anyone bold enough to stare too long at them.  She is the epitome of a Perfect 10... but she has no concept of how to handle a significant other.  None whatsoever.

In today's society where hot bods are pushed to us ad nauseum on social media and on television, it's easy to get caught up on a person's looks.  As a guy who stays on the go, I encounter good-looking women quite often.  Some of them are single, too.  But spend up to 15 minutes or so talking to them and you will quickly find out why that is the case.

Yet it's still so tempting to ask them out.  In my mind, I know that she's selfish and has no clue of how to love me, but there are many factors that will compel me to ask her out:

1) She's hot.  'Nuff said.
2) My friends would think that I'm a rock star to bring a nugget like her around.
3) That fantasy in my head that she'll figure it all out and become the "perfect woman."

Well, there's no such thing as the perfect woman (or man) for that matter.  However, there is a such thing as finding someone who is "perfect for you."  It's all about figuring out who cares for you more than anything else.  Beauty fades and with that being said, who wants to be sitting next to a 60 year old hag with an personality problem decades down the road?

Not me.  If people start focusing on "affection" instead of "perfection" then they can have someone who shows them daily that they love them rather than someone who is essentially putting on a masquerade.

Although that's what we should all ultimately crave, it's still okay to continue to date hot women in the meantime, right?  Even if they are shallow and/or selfish?  I'm just asking for a friend. :)
at 7:08 PM 2 comments:
Email ThisBlogThis!Share to TwitterShare to FacebookShare to Pinterest
Labels: attraction, hot bodies, relationships, selfish, shallow
undefined Madison, MS, USA

WRITER / ARRANGER / SINGER Roberto Festari (a.k.a. Nick Festari) started to study piano at 9 years old. When he was 16, he became one of the organists of his parish. It was there that he took his first steps accompanying a talented choir during the liturgical celebrations and performances.

In that period, Nick met the 2 people who would have believed in him, and together they have been writing some of the best eurobeat hits for years. In 1986 he started a cover band with some friends where he has been playing keyboards for about 2 years. In 1987 the musicians and Live Music Studio owners Claudio Accatino & Federico Rimonti began to work with the well-known dance producer Mark Farina. Nick Festari started to cooperate with them playing some arrangements and rhythmics, progressively improving his studio work skills.

In the meantime, he became a member of a band and gospel/Christian rock choir that performed in some churches and small local theaters. Furthermore, he participated in various song contests as writer, winning the last edition in 1992. In the same year, Accatino & Rimonti joined Time Records (a famous Italian dance label) and proposed to Nick to writing new melodies for the Japanese audience.

Two years later, Claudio and Federico started their own label, "HI-NRG ATTACK", where Festari was involved in writing almost 800 songs in about 20 years, also arranging and often singing these tracks behind many aliases with his own particular style. These songs have been long appreciated by the Japanese fans and a good part of the world that love eurobeat and Italo-dance.

At the end of 2012, Nick considered the chance to undertake a solo career and began to write a voice/piano pop-ballad. Once finished, he took some months to make a hard decision, and in summer 2013 he took a chance and left eurobeat, dance scenes and HI-NRG ATTACK that gave many satisfactions and professional skills to him. Now Nick Festari dives into pop-music trying to reach for a totally new audience with his own style so appreciated in his former path.

Liars Come A Dime A Dozen

I've been back in the dating world for about five months now and there have been two things that's been made abundantly clear to me: one of them is that the world is filled with liars.

Not so much the type of liar who tries to scheme something out of you.  But the type of liar who will tell you what you want to hear knowing that they have no intention of following up.  I hate it when someone says that they're going to do something knowing that they're not going to make an attempt at all.  I am a man of my word and I absolutely do not say I'm going to do something without doing it (barring some emergency).  Lord knows that I've dealt with my share of people who don't subscribe to the same theory though.

The second thing that I've learned is that: women lie just as much as men.  And they're not as good at it as they may have once been historically.  Lying is definitely no longer a "man thing" in 2015.  From the lies told on Facebook to the lies told in reality, so many women appear to be in some invisible competition that requires them to act more than what they are.  Sometimes I look at some of the things that my lady FB friends post and think to myself, "Doesn't she know that some of her friends know her in real life?"

But the pressure of 5,000 "friends" will drive some people to do so many things just to maintain their online reputation.  Even if it soils their real life reputation.

I guess all I can do is try to sort out the good from the bad.  I understand that not everyone is honest and that some lies aren't meant to be harmful (telling someone with a messed up hairstyle that it "looks good" to avoid hurting their feelings).

Lying may be a necessary evil in some situations.  But to what I would guess is a majority of American citizens, it's not that big of a deal to lie to someone you know or don't know just to get some sort of temporary (and mostly meaningless) victory from it.
at 7:22 PM No comments:
Email ThisBlogThis!Share to TwitterShare to FacebookShare to Pinterest
Labels: advantage, facebook, fake, instagram, lie, twitter, women
undefined Madison, MS, USA
Newer Posts Older Posts Home
Subscribe to: Posts (Atom)