As A Black Man, Should I Boycott The #NFL? 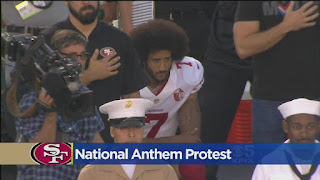 Okay, so we've all been hearing about the controversy behind Colin Kaepernick taking a knee during the National Anthem last season.  It's been discussed for a year now, but it's reared its ugly head once again because a new season is about to start.

For those who have been living under a rock, let me explain what's been happening over the past 365 days or so.  Kaep, who was a member of the San Francisco 49ers at the time, decided to take a stand against police brutality.  Unlike most athletes these days, Kaep decided to use his platform as an NFL player to raise awareness to his cause.  He said that he would take a knee during the National Anthem until this country took a stand against the treatment of black and brown people by the police.

The response from the media?  "Colin Kaepernick hates the troops!"

Of course, that same rhetoric came from the fans as well (since we take instruction from the media on where and how to direct our outrage).  Fans said that Kaep was disrespecting the veterans because he would not stand for the Star Spangled Banner.  Rarely was police brutality mentioned at all during the many weeks and months of this controversy.  It's been Kaep vs. the USA.  The whole message of police brutality was lost thanks to the media's spin.

Well, now that the controversy is a hot topic again, thanks to a new season kicking off, I started receiving a video link on Facebook about boycotting the NFL.  You may have seen it, but if you haven't, then peep it here:

First, I want to applaud the people who put together the video.  Any time black people get together to do something positive, then I'm all for it...  in most cases.  This one, I still can't get with the message.

The focus of this video, to me, is that once Kaep gets his job back, then everything is good.  No, it's not.  The message has been lost again.  Boycotting the NFL to get Kaep's job back will not fix police brutality against black and brown people in this country.  Does the NFL need to be brought down a peg?  Absolutely.  These 32 "owners" are undoubtedly blackballing a player who could contribute to just about all of the teams in the league.  But not watching games won't hurt anyone other than the TV stations, who may lose some ratings.

The best way to boycott the NFL is to boycott their sponsors directly.  That's what happened with Michael Vick.  People boycotted his sponsors and they dumped him faster than you can say "Hector 'Macho' Camacho".

And would you stop your son from watching the games, too?  Especially if he is an up and coming star looking to play in the NFL some day?

Don't get me wrong.  So much has to be done to right a lot of wrongs in this country.  But, our approach will determine if it works or not.  Keep boycotting and not voting and you won't see very  much change.  Be mindful of where you spend your money if you want to promote change.

In fact, encouraging the players to do more is the best route to go.  If 70% of the NFL is made up of black players, then wouldn't that be the best place to start?  No players, no games?  If it worked for the University of Missouri's football team, then it can work for the NFL players, too.

So, will I "black out" the NFL games this season?  Nope.  I will watch like I always do.  Will I buy a Budweiser, Nikes, Gatorade, or something else that sponsors the NFL?  Nope.  And I don't think that you should either.

Consumer sponsorship boycotting is the way to go.  History agrees with me. 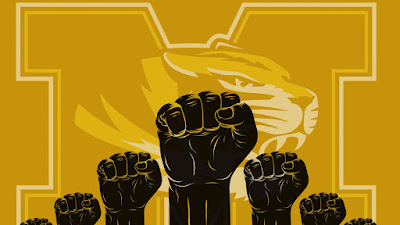