Why Are There So Many Churches Yet So Much Evil? 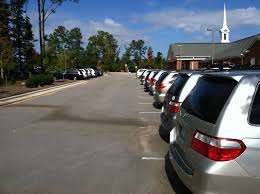 I left church yesterday and I drove around my city to find a good breakfast spot.  I live in a city of 24,000 people.  My North Jackson, MS suburb is about 18 square miles.  However, as I drove from the east side of the city to the west side, I must have passed 6 or 7 churches.  I saw all of the vehicles parked outside of each church.

I started thinking about all of the churches in Jackson (population 170,000).  You can drive a 5 mile stretch in that city and easily see 10+ churches.  I'm not sure how it is in other parts of the country, but in the South, there are more churches than gas stations on every other corner.  I'm not saying that this is a bad thing.  If you refer back to my first sentence, I attend church, too.  However, what I'm wondering is how are there so many evil people in the world if so many people attend church?

That leads me to believe one of two things: either most of the people who attend churches are hypocrites or churches are not effective teaching its parishioners how to become better people.  Or maybe it's both, I don't know.  Either way, there's a problem somewhere.

No one is perfect.  We all sin, but the level of nastiness in some people these days is astonishing.  I've met some very nasty and petty people in my life who are at church every time it opens.  They sing praises on Sundays and mistreat people the rest of the week.  Adulterers, liars, racists, greedy CEO's, gossipers, abusers, etc.  The list goes on.  Yet, they clean up on Sundays and sit in church and shout "amen" to a way of life that they don't even attempt to follow.

And despite the fact that so many of them know their holy scriptures like the back of their hand, for some reason, it doesn't apply to them.  You can't tell them that they're doing anything wrong without backlash
.  After all, only God can judge you, right?  Good luck with that when you meet Him.
at 7:59 AM No comments:
Email ThisBlogThis!Share to TwitterShare to FacebookShare to Pinterest
Labels: churches, evil, politics, racism. hypocrisy, religion, society
undefined Jackson, MS, USA

You Can't Argue With "Victims"

So, I'm listening to two people (man and woman) discussing a relationship topic that occurred in a movie.  Before I could even give my two cents, the disagreement between the two went sideways.

The guy defended a male character from a movie.  The male character did not make his wife a top priority through two decades of being together.  He was always chasing a dream.  His wife got fed up and divorced him.  Shortly afterwards, his dream came through and dude made millions off of his idea.  Although his ex-wife had moved on, he gave her $10 million dollars to try and make amends for all he put her through.

By now, some of you recognize this movie, but I didn't want to go into details and spoil it for those who haven't seen it.

Anyway, the guy referred to this male character in the movie as a "stand up guy".  Because although he was not legally obligated to give his ex-wife anything, he felt morally obligated to try and make up for the stress he had caused her for pretty much all of her adult life.  And he caused a lot of stress!

But as the guy makes his statement, the woman interjects and said something along the lines of, "that's just like a typical guy to refer to this dude as 'stand up' after all of the pain he caused in her life."

The guy quickly thought about his statement and apologized.  "You're right.  I misspoke.  He was definitely a horrible husband, but I was just glad to see him try to fix it by making sure she was set for life."

So, I'm thinking to myself that everything was good.  She made her point and he agreed and apologized.  Now I can give my two cents on the movie.  But, she wasn't done...

"I can't stand it when men take that attitude and think that they can just fix a problem with one good deed," she started.

This went on for about 60 seconds before I decided to make my way to the ice machine to fill my cup and slowly disappear.  She lit into this guy from what started as a conversation about a movie.  And even after he agreed and apologized to her, she decided that it wasn't good enough and chose to belittle him.

When does an argument end?  Why can't people accept a sincere apology and move on?  Do we have to beat someone over the head until they just drop to their knees and submit in order to be satisfied?

Well, here's my two cents on the matter: as long as a person can argue with you as a victim, then they feel as if they have leverage on you.  You can no longer say something that may be deemed as judgmental or offensive to them because you're stuck in an apologetic state.  If they forgive you, then they lose their perceived power over you.  So, some think that it's best to drag out an argument as long as they can to take advantage of victimhood.

Being a victim is the wave in today's society.  We all want to fight off of our back's and force someone to bend at our will. The end-result is a country filled with pathetic individuals always crying about something.