We Can Stop Domestic Violence With Parenting 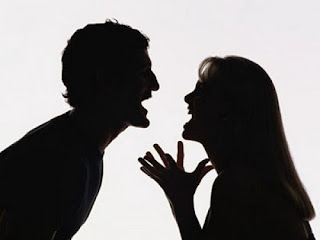 It's just that simple.  Teaching your son and/or daughter not to put their hands on other people can go a long way towards healing lives instead of ruining them.  Now, I'm taking mental health issues out of the equation here.  I'm talking about the natural ability that most of us have to walk away from negative situations.

Yesterday, I got a phone call from someone about a friend of mine whose husband killed her.  I won't dwell on the how and why because it's not relevant to my blog post.  I'll just say this much about her: she was an advocate against domestic violence and even wrote books about it (I reviewed one of them here).  She was someone who was beyond sweet to me and to never be able to hug her again truly hurts.

But, back to the topic at hand.  Society has to do better.  Domestic violence is something we can all have a hand in stopping if we simply take the time to educate.

Men should not be taught that it is never okay to violently put your hands on a woman unless it's a life or death situation.  Either restrain her until you can get to safety or flee the situation.  I've seen domestic abuse up close and personal and I know the affects it can have on not just the victim, but their loved ones as well.  Domestic abuse can be a cycle started by a father who unknowingly teaches his son that it's okay to do it and to his daughter that it's okay to endure it.

Women should be taught that it's never okay to hit men unless it's a life or death situation.  There are some women in society who take advantage of the fact that a man is not supposed to hit them.  This emboldens them into attacking him and daring him to retaliate and risk him possibly being arrested.  Don't do it, ladies.


All I pray is that everyone who reads this decides to sit their son/daughter down and stress to them the options that they have other than assault.  I don't care how old they are right now.  Do it!  Let them know the avenues that they can take to avoid trouble.  Don't wait for them to get into the situation, but instead, use preventive maintenance to teach them how to avoid finding themselves there.


I don't care how hard that you try, you can't make someone love you.  I know this for a fact.  Just let them go and choose from one of the other millions who are what you're looking for in a mate.

I personally know a lot of guys who have hit women and a lot of women who have hit men.  I've personally called each and everyone of them I've spoken to "cowards" to their faces, including relatives.  It's not okay.  Stop waiting until it happens to someone that you love before you take it seriously.  Please teach.  That's all I ask.
at 12:36 PM No comments:
Email ThisBlogThis!Share to TwitterShare to FacebookShare to Pinterest
Labels: domestic abuse, love, marriage, murder, relationships, violence
undefined Jackson, MS, USA
Newer Posts Older Posts Home
Subscribe to: Posts (Atom)