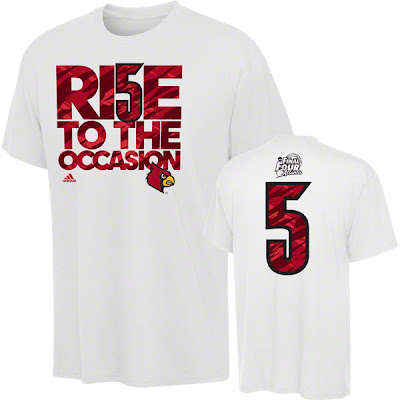 However, I hate to see kids exploited.  This include college kids who get the shaft every year by the NCAA and other companies.

Kevin Ware is a 20 year old basketball player for the University of Louisville.  Last week during a game, he jumped out on defense and landed awkwardly on his feet.

This resulted in his leg collapsing and him experiencing one of the most gruesome injuries I've seen in all of my years of sports viewing.  You can view it here if you have the stomach for it.

Along comes Adidas with a dollar an inspirational idea in mind: why not create a shirt with a motivational quote using Kevin Ware's number? People will feel sympathetic towards him and will buy this shirt despite the fact that Kevin won't see a dime of it.

It's nothing new.  College kids in athletics have been exploited since the first TV contract was signed.  Sure, some people say, "well, they get scholarships, so that's their payment."

That's an understandable, but ignorant statement.  The scholarship would be an even trade-off if these kids were able to lead normal college lives like other students.  However, they can't.  Football and basketball players aren't allowed to work.  So, if they can't have jobs when playing, then how can they have money to do things that college kids do?  A Criminal Justice major isn't prevented from having a job, so why should a linebacker be?

These big schools pluck these college kids from inner cities and basically imprison them inside of a weight room.  The fact that these kids can't make any money is why you hear of so many scandals of boosters paying players.  And who gets punished when these kids take the money offered to them?  The kids.  Even if the coach gets caught up in the scandal, they can easily resign and find another school to coach.  The kids are levied stiff penalties that are even inherited by incoming freshmen who had nothing to do with the incident.

Football and basketball bring in millions to colleges each year in ticket sales and merchandising.  They could easily place some of that money into an account and hold it until the players graduate.  That would encourage the players to get their degree and be rewarded after graduation for their service to the school.  The players who decide that they want to go pro instead and not graduate waive their right to the fund.  Besides, they won't need the allotted funds anyway since they're now able to earn their own money.

The fund would be for kids like Kevin Ware.  Kevin may not get a chance to play professionally after suffering such a tragic injury, so having a savings waiting on him after graduation could be a huge boost for him.  He would get some of the money from the shirts that Adidas wants to make.  It would be a win-win except for the fact that those old men wearing the brightly-colored suits at the bowl games want all of the money for themselves.

After the controversy started swirling around the shirts, Adidas offered to donate the money to the Louisville scholarship fund.  A nice offer that would undoubtedly benefit a needy kid, but still not Kevin.

Former UCLA basketball player, Ed O'Bannon, is suing the NCAA and EA Sports for using his likeness in a video game.  I hope that he is granted class action status so that it opens the door for student-athletes to finally be rewarded for the sacrifices they give to their schools.  They need to stick it to the NCAA and other companies that exploit them since they all refuse to "Ri5e to the Occasion."


Do you think these kids are being exploited or you think that everything is fair as-is?
at 9:14 PM
Email ThisBlogThis!Share to TwitterShare to FacebookShare to Pinterest
Labels: adidas, exploit, final four, kevin ware, louisville, ncaa