Tia Norfleet is a 24 year old black woman who's looking to make her way onto the NASCAR circuit. Now, many ladies have already paved the way for women in racing, most recently, Danica Patrick. However, Tia has another trailblazer to follow who just happens to be her dad. Bobby Norfleet was a racer who thrived back in the 90's and helped NASCAR gain some awareness in the black community.

However, there is something that I hope Tia avoids: being sexualized. Danica Patrick has already fallen into that pit by doing Maxim and the Go Daddy commercials. Because men, who represent a majority of racing fans, have turned her into a visual fantasy, she has to be better than just "good" in order to be taken seriously in racing.


When women get involved in predominantly male-viewed sports, I think that it's a bad thing for them to succumb to the pressures of getting rich and subjecting themselves to being sexualized. I'm a huge fan of mixed-martial arts fighter, Meisha Tate (although she was beaten pretty badly the other day by Ronda Rousey). Meisha is a great fighter and has done some pretty exciting things in her MMA matches. She has also posed for magazines and websites in less-than-revealing clothing. She has a ton of male fans, but are they flocking towards her because of her fighting skills or the fact that she's hotter than fish grease on a Mississippi farm? Or both?

So, there's a thin line between 'famous for what you do' to 'famous for how you look.' I know it's wrong for men to sexualize women as we do. Face it, we're Neanderthals. However, despite the fact that it's wrong, it's reality. And as long as there are women who will take booty shots on camera, there will always be men who will be in the market for it. There's a time and place for everything and I get that to some people, their bodies are all the talents that they have. But, if you possess a talent to compete in a sport or even an everyday place of business, then why belittle those talents by taking it all off? I'm just hoping that Tia Norfleet has more photos like the below and makes her mark in NASCAR for how she 'drives cars' rather than how she 'drives men crazy.' 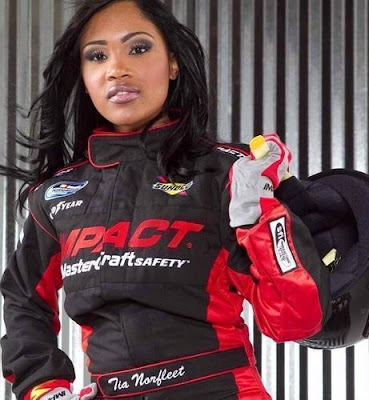 Do you approve of women taking it off to get awareness in male-viewed events?
at 12:07 PM
Email ThisBlogThis!Share to TwitterShare to FacebookShare to Pinterest
Labels: race, sexy, women