Can You Teach Patience? 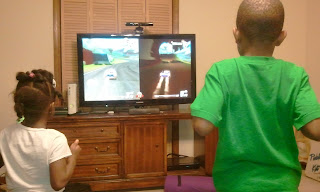 I picked up my godkids this weekend to hang out with them a bit and give their mom a much-needed break. I enjoy spending time with them because they absolutely crack me up. The boy is 9 and the girl is 5. They love coming over here because I have the Xbox 360 Kinect. They go non-stop on that thing and I wonder if sometime they're on the verge of passing out from exhaustion.

Anyway, my godson wants to play a game called Hydro Thunder. It's a super-speedboat racing game that isn't extremely hard, but does require a few instructions to play. As the game started, I sat back and allowed him time to view the instructions, but he skipped past them. "Don't you need to read the instructions to know what you're doing?" I asked.

So, I decided to do the "tough love" thing and I completely dominated him in the game. He seemed only a little bit frustrated, so we played again and I beat him even worse the second time. "You know," I started, "if you read the instructions, you may do better."

"Yes, sir," he responded never taking his eyes off the screen.

I allowed him to win a second game which brought a smile to his face. Did he learn a lesson? Only time will tell. I'm not sure if you patience is something you're born with or not, but I'm doing what I can to instill it into my god kids. Things can turn out so much better when you take the time to learn how to maximize your abilities by reading. I wonder if kids are so impatient simply because everything in technology these days brings about instant gratification.

I always read the instructions before playing a video game when I was a kid, but then again, video games were a quarter when I was young. I knew that I would be foolish and quickly out of money to play without taking the time to learn the controls. So, maybe that's where I developed some patience. Or, is it because I always saw my older brother buy something and read the instructions before he even bothered to take the product out of the box.


Can you teach patience or do you have to be born with it?
at 11:54 AM
Email ThisBlogThis!Share to TwitterShare to FacebookShare to Pinterest
Labels: kids, parenting, patience, storytelling