I'm sorry, but I have to play the role of angry black man for a post.

If you haven't heard by now, then you will soon. There's a new craze taking the sports world by storm: Tebowing! Here's the definition of Tebowing: (verb) to get down on a knee and start praying, even if everyone else around you is doing something completely different.

I didn't make that up. I took that definition from a website. 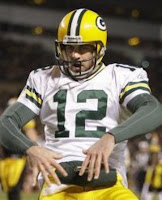 Aaron Rodgers of the champion Green Bay Packers has a move that he does when he scores a touchdown. He does an impersonation of someone putting on a championship belt a la boxing or wrestling. I've seen countless stories done on this craze on ESPN and FOX Sports.

It's caught on like mad since last season with all of the exposure it gets. 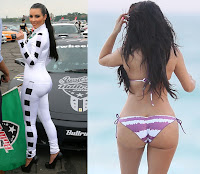 Okay, non-sports topic. Kim Kardashian is praised for her butt. She released a sex tape with loser, Ray J, some years ago and her butt has been all over TV, websites and magazines ever since. She is extremely curvy and has even been credited with the influence of Booty Pop Pads. Even though J-Lo ignited the craze, Kim K. was the gasoline that set it ablaze and turned it into an inferno. Now booty is something that people are actually paying money for to have surgically implanted for those who weren't blessed with the bump at birth.


(Insert angry black man here)
Are you kidding me? Why is it a trend now? Why is it that things black people either did first or have done for years are being hyped when someone white does it?

Tebowing Kneeling after a touchdown was done before the invention of the internet. Tebowing? Seriously? Players have been doing this for as long as I can remember, but now it has a name? And why isn't it just called "praying?"

As for Aaron Rodgers' championship belt move... Are you kidding me? Freddie Mitchell, who played for the Philadelphia Eagles, was doing this back in 2004 and he's one of many. Why is it such a big deal now? Mitchell made the mock championship belt famous while Rodgers was still a junior in college.

And don't get me started on K.K.'s booty. Black women have had "apple bottoms" since man first walked the earth and now all of a sudden it's attractive? After years of seeing women resembling the letter "I" on my TV and on magazine covers now it's in vogue to be shaped like an "8?"

These type of things have been going on since before I was born. Back in the '70's The Jackson 5 got their own cartoon while the Osmonds got their own cartoon, TV show and movie. Rap was a predominant black genre for decades, but Eminem has won more Grammys in the last 10 years than any black rapper has from 1979 to now. In fact, it takes rap legends Jay-Z, Kanye West and L.L. Cool J. combined just to have more nominations than Eminem. That's over 60 years of rap experience combined to just to beat one man.

Do you see where I'm going with this now? Look, I don't want to discredit any of the people listed above. Tim Tebow has the heart of a champion. Aaron Rodgers is the best quarterback in the NFL right now. Kim Kardashian is one of the finest women on the planet. (I have no comment on the Osmonds -- LOL!) Eminem is one of my favorite all-time rappers. Not once did I say weren't worthy of being great.

The point I want to leave everyone with is that I wish the mainstream media would not act like black people who came before them (doing what they did) don't exist. Don't hype one without hyping them all. Enough of this Columbus Day syndrome and giving people credit for discovering something that was already here.