I'm Such A Memorable Guy! 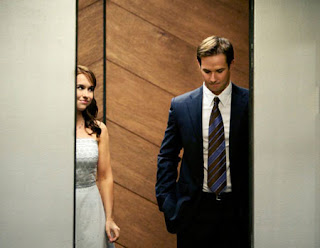 (1/28/15) I pulled up to a stop light this morning on my way to work and this lady pulled up next to me and signals for me to roll down my window. I'm thinking she's going to tell me that something is wrong with my car, but instead she asked if I remembered her.

I look confused because the entire ordeal is extremely random.  I check to see if the light is still red and then I return my gaze towards her with a look of confusion.  She looked familiar, but I had no idea who she could be.  A former coworker?  A college classmate?  Before I could answer, she said, "I met you in the elevator at the Doubletree in Memphis."

I let out an "ohhhhhhhhhh!"  I did remember her from the hotel.  I'd met her on the elevator.

But, wait.  I took that trip back in mid-November.  Still amazed at her recall abilities, I asked how she was doing.  She told me that she was on her way to work.  She asked me if I'd been back to Memphis and I told her that I had not.  The stop light turned green, she told me to have a good day, and then drove off.  Let me back up a bit back to November 2014...

I met this lady on the elevator at a hotel.  I don't even recall how the conversation started, but I'm pretty sure that I started it.  I always talk to people on elevators because I get a kick out of talking to people in awkward moments.  She told me that she was also from Jackson, MS and that she thought I looked familiar.  We didn't know each other, but Jackson isn't all that big, so it's possible that we had mutual friends or something.  Our conversation lasted 30 seconds at best.  About twenty minutes later, I went back to the elevator to go down and get something out of my car and I ran into her again.  Like me, she was also taking a vacation just for the heck of it.  Just to get away from home.  We chatted for less than a minute on the elevator ride down and as we exited the hotel I told her to enjoy her stay and that was the last I saw of her.  At least until I passed her on a frontage road on my way to work.

I'm a talker.  I will talk to someone just because we're in the same area.  But what could I have possibly said to make this woman remember me?  90 seconds of total talk time and you can recognize me passing you on a frontage road two months later?  Through my slightly tinted windows?  I'm just not buying that.  At some point during that weekend in Memphis, she had to have seen me get into my car.  Maybe she recognized the Univ. of Southern Mississippi tag that used to be on the front of my car because I just don't see how she could have spotted me the way she did.

I guess I'll never know unless she sees me again some where.  Dag, I'm such a memorable guy.  I don't know if that's good or bad.
at 8:17 PM
Email ThisBlogThis!Share to TwitterShare to FacebookShare to Pinterest
Labels: conversation, first impressions, friendly
undefined Jackson, MS, USA