What's the matter ESPN? Fat women don't like sports? Is that why I see a bunch of ex-models or hotties on the sidelines telling me about someone's injury?

Women have tried for the longest to join the sports world. A world that has always been dominated my men. Now that you see more women talking sports than ever before you have to wonder:

Are women still viewed as inferiors in the sports world?

Sad to say, but the answer is "yes". Women are still not taken seriously in sports. It's not the fault of the everyday female sports fan who is attending games or rooting from her couch. It's the fault of the sports stations exploiting women for their personal gain. 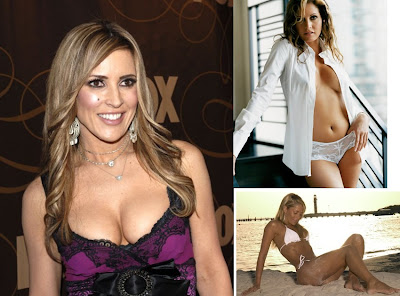 Jillian Barberie was the stereotypical weather girl for FOX NFL Sunday. She offered no sports knowledge whatsoever and little weather knowledge either if you ask me. Lisa Guerrero was a Los Angeles Rams (yes, they were once in L.A.) cheerleader and was probably the worst female sideline report in the history of sports. She couldn't even get the team names right and was gone after one season. I blogged about Ines Sainz before, so there's no need to repeat myself about her setting women back 20 years in sports.

Women who are hired for looks and not knowledge wind up on the receiving end of cell phone texts of naked guys in Crocs holding their junk. 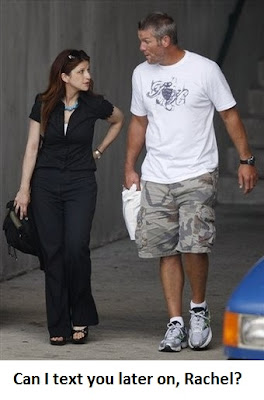 There are so many respectable women in sports. Suzy Kolber has been in the game for a minute and has even hosted NFL Live on ESPN. She's very respected in the field although a drunk Joe Nammath did try to kiss her on national TV once. Michelle Tafoya has to be my favorite sideline reporter. I rarely hear her ask anything irrelevant and you see the respect the players have for her despite being a cute lady. Lisa Salters is mainly an NBA sideline reporter and despite her 5'5" frame amongst giants, she is friendly yet respected in the league. And I'm a huge fan of Pam Ward who not only knows football inside-and-out, but better than most of her male counterparts. She's the only female I'm aware of that does play-by-play for NCAA football. A female in the booth calling the game is the ultimate achievement. 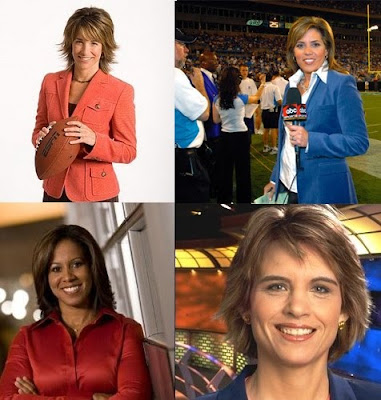 And then there are the women who fall in the middle. The women who display their sexy side, but still struggle to grasp respectability in the workplace. It's understandable how some of them want to hold on to their femininity and still expect the same reaction towards them as the guys get, but is it realistic?

Erin Andrews started her career with a conservative wardrobe, but over time became sexier on the sidelines. Ironically, her popularity grew from there and she's now a Google search favorite in college frat houses across the country.

She now has a huge career (even flipped it into an appearance on "Dancing With The Stars"), but at what cost? Just being a sexy shape on the sidelines who tells me if someone is injured? When Erin hosts ESPN College Game Day, does anyone listen to whatever two cents she may offer up as a football opinion? 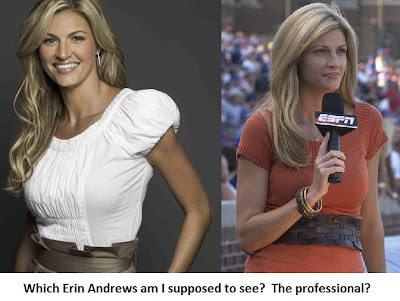 Only time will tell what will happen to her career. Will she end up as another Andrea Kramer and stay in the game for over 25 years? Or will she wind up being replaced by the next sexy 20-something like the women who have preceded her? 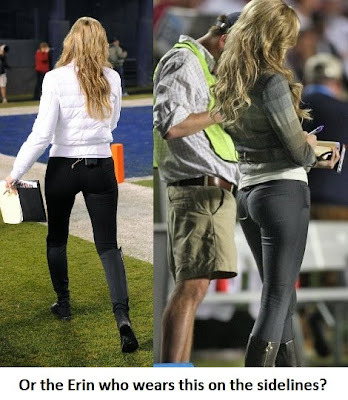 Erin outfits could lead to more outbursts like this. This is a clear demonstration of how she's viewed, even by a college athlete.

Women can say "they have arrived" the day they have crusty old ladies working sporting events. The day they have a female version of John Madden, Al Michaels or Tony Siragusa working the sidelines is the day they can celebrate. If I had to guess, the average age for a male in football commentating is probably around 50 years old. For women, I'm sure it's closer to 30 years old.

I guess it's still a Man's World after all.
at 6:00 PM
Email ThisBlogThis!Share to TwitterShare to FacebookShare to Pinterest
Labels: barberie, model, sexy, sideline, sterger, tafoya