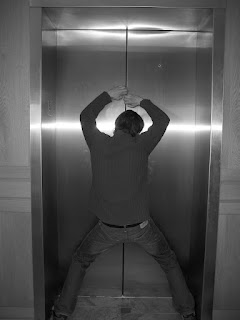 Back in my college days, a lot of craziness occurred. Unfortunately, since this was before the days of cell phone cams and YouTube, most of the antics were unseen to the world. So, now and then, I have to do things the old fashioned way and tell you a story about the time I was at Mississippi Valley State...

If you thought Part I was bad, then imagine the horror I must have felt from this tale. This incident actually occurred on another college campus. The campus of Alcorn University. This was a rival to my school that was located about 150 miles south of Valley. My roommate and I traveled there to watch a basketball game between the Alcorn and Valley. Afterwards, we decided to stop by one of the dormitories to visit a high school friend of his. So, it was me, Tim, a guy named Bobby and another guy whose name escapes me.

We walk into the dormitory and proceed to the elevator. We get in, face the front, press the button and as the doors start to close, a freakin' armadillo walks onto the elevator with us as if he belonged.

Yes, you read that right. An armadillo. Now, despite watching many episodes of "Wild Kingdom" while I was growing up, my knowledge of armadillos was next to zero. The same must have been true for the other guys in the elevator because panic ensued immediately! We had no idea what that thing was capable of. We also had no idea that armadillos make a horrific sound and jump (quite high, I might add) when they get scared. Go here to open a new window and see an armadillo jump (no need to watch more than 30 seconds of the video). As for as how they sound when they're scared, just peep the video below or go here if you don't have Flash.

So, imagine that noise and a creature jumping around the elevator with four grown dudes who are completely terrified. As the armadillo bounced around and made screeching sounds reminiscent of the snake in the old Q*Bert arcade game (for the 70's babies), the four of us visited every corner of that elevator multiple times in an attempt to get away. Four guys, the smallest being 220 lbs., smashed up in a corner like children. All of us were attempting to climb up the elevator walls like Spider-Man with Vaseline on his fingers, not wanting to be attacked by the armored rodent who may as well been a cobra by the way we were reacting.

We almost tore that elevator up. When the doors finally opened, we shot out of that elevator like a Roman candle. Two other guys, who were waiting on the elevator, stared at us as they started to walk into it. One of them saw the armadillo in the back corner, fell on to his back and proceeded to scurry backwards on all fours like something from "The Unborn."

The doors closed and the "threat" was over. How an armadillo got into the dormitory is beyond me, but my mom almost lost her youngest son to a heart attack that evening. I've gotta start taking the stairs.


.
at 9:42 AM
Email ThisBlogThis!Share to TwitterShare to FacebookShare to Pinterest
Labels: animals, college, storytelling