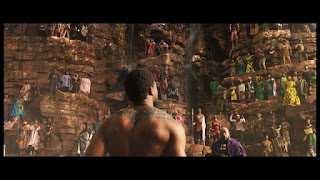 Back in my teens in the late 80's, I developed more of a sense of pride in my race. It's not to say that I never had any, but it really didn't materialize from a knowledge perspective until in my teens, thanks to music. Specifically, rap music.

There were quite a few artists who contributed to me blossoming in my blackness.  Listening to Public Enemy introduced me to the Black Panther Party and their contributions to black society. Boogie Down Productions educated me on how the legal system and school system have set black people up to fail. Ice-T educated me on life as a hustler and how the perceived "high life" was only temporary, thanks to jail or death.  There were a number of others I learned things from as well.

Once I developed that pride in myself, then I found pride in those who look like me. Especially black women.  I started to recognize that the media could not dictate what a beautiful woman was to me.  I saw the beauty in dark skin and full lips.  I understood what they represented in my heritage.  I went from falling head over heads for television's definition of beauty and started to appreciate so many of the natural beauties that I encountered regularly.  Who knew that music could give me so much data in which to research and learn about my true self?

Fast forward to today and 80's style of conscious rap is no longer played on the radio.  Despite its educational value to the black community, it's no longer mainstream.  Today's mainstream music usually contains wasteful and destructive messages.  Not just towards our communities, but towards our black women as well.

We need to find some way to reverse this trend.  We need to teach our youth that there's value to our black skin and it should be protected at all times.
at 6:17 PM 2 comments:
Email ThisBlogThis!Share to TwitterShare to FacebookShare to Pinterest
Labels: black, black community, black women, rap
undefined Jackson, MS, USA
Newer Posts Older Posts Home
Subscribe to: Posts (Atom)