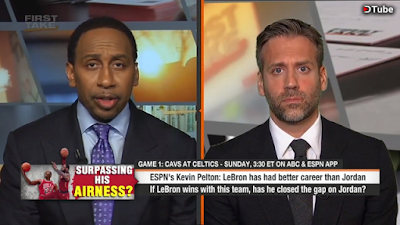 I once was a huge fan of the talking head shows on ESPN.  From "Pardon the Interruption" to "First Take", I was setting my DVR to "embrace debate".

However, over time, I started to get suspicious of the content that I was viewing on a regular basis.  The debates started to get really outlandish.  The talking heads were not being objective over the topics of the day, but instead, they started showing a bias based on their favorite team/player.  And every day one of the talking heads would make what appeared to be an illogical statement based on how he/she felt rather than anything pertaining to the game itself.

The shows I once enjoyed because of the great points that were being made had turned into reality TV.  They looked to be over-produced prescheduled arguments that cause an MSNBC/FOX News type of divide with the viewers.  The debates are now more heated than some of the arguments I've witnessed in sports bars and sometimes with just as little analytics involved.  It's great for ratings, but bad for sports fans.

I've had a hard time facing the fact that nothing is sacred any more.  The media only cares about increasing viewership and if that means having someone screaming about "LeBron being better than Jordan" or "Baker Mayfield being the next Tom Brady", then they're all for it.  They don't care if the arguments have been run into the ground or if the points attempted to be made are valid or not.

ESPN, FOX Sports, NBC Sports, and CBS Sports are all trying to out-crazy one another to get the more eyes on their screens and I think that it's working.  Unfortunately, I can no longer lend my eyes to the count.  These shows are no different than "Real Housewives of (Insert City Here)" to me.  Just a bunch of fake outrage over cliche topics.  I guess it's back to reading sports websites because these shows just don't hold any value to me anymore.
at 6:32 PM No comments:
Email ThisBlogThis!Share to TwitterShare to FacebookShare to Pinterest
Labels: controversy, espn, media, ratings, reality shows, sports, tv
undefined Jackson, MS, USA
Newer Posts Older Posts Home
Subscribe to: Posts (Atom)