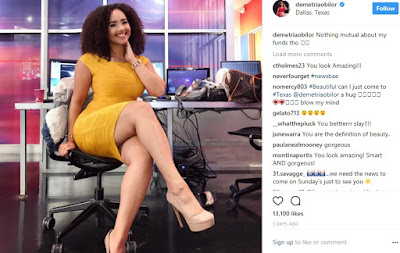 Jan Shedd took to Facebook on Wednesday to call out Channel 8 in Dallas’ new traffic reporter, Demetria Obilor, who she said was a “size 16/18 woman in a size 6 dress.”

“Has anyone seen Channel 8’s new morning traffic reporter? Her name is Demetria Obilor & she’s a size 16/18 woman in a size six dress and she looks ridiculous,” Shedd wrote in the now-deleted post.  -- NY Daily News

Here we go again.  I can't believe that in almost 2018, we still have to deal with the level of hate that we see in this country.  Then again, why should I be surprised?  Social media has given the haters of America the illusion of being experts in the criticism of their targets.

There's a traffic ensemble anchor in Dallas, Texas by the name of Demetria Obilor.  As you can see by the photos, she's extremely attractive.  However, that's working against her in the eyes of some of her viewers.

Here's the thing: you can be a TV personality and be attractive, but you have to do it by "societal standards".

What does that mean?  You can't be urban with it.  No extreme curves.  Booty, hips, and thighs need not apply when it comes to being a female sex symbol in the U.S.  In other words, you can't be too black with it (despite the fact that some white women pay top dollar for surgical enhancements to "black it up", for lack of a classier phrase).

We need to find a way to put a stop to this behavior.  First of all, she's a news personality who is doing her job.  Just like all of us, she has a right to choose whatever profession that she wants.  And let's throw in the fact that this Nigerian/American was born this way.  Why should she change who she is genetically because Jan Shedd and a few others think that she's too hot for TV?  Should she wear a muumuu instead of a dress that fits?

Secondly, she has the right to flip her profession into whatever entrepreneurship she chooses.  That includes recognizing the fact that people are enamored with her looks and turning that into a modeling/speaking/hosting hustle.  I'm a firm believer in using what you got to get what you want.  That means she can be a news personality and a model simultaneously.

And lastly, when are we going to accept the fact that it's okay for women to be sexy and respected at the same time?  Why does it have to be one or the other?  Can a lady be good-looking and knowledgeable?  Does credibility only come in a size 4 with straight blond hair and blue eyes? 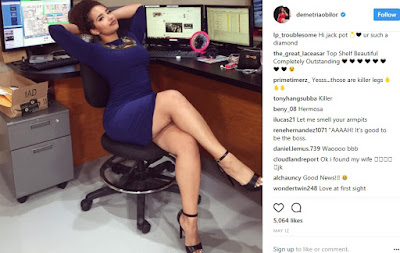 Leave the Demetria Obilors and women like her alone.  Every year there's someone different who catches backlash for having a banging body on a newscast (usually black or Latina).  Ironically, the criticism seems to come almost exclusively from women.  And ladies should be supporting her instead of tearing her down.

If  a shirtless Dwayne "Rock" Johnson did local weather, do you think guys would be on Facebook saying that it's too much?  Hardly.  We'd either say that it was cool or we would just change the channel.

It's time out for the foolishness, ladies.  Stop shaming these ladies just because your man is watching a lot more news than he did a few months ago.
at 10:45 AM No comments:
Email ThisBlogThis!Share to TwitterShare to FacebookShare to Pinterest
Labels: black women, body shaming, hating, news, racism, sexy, social media
undefined Jackson, MS, USA
Newer Posts Older Posts Home
Subscribe to: Posts (Atom)