@RealEarthquake Had His Hands Full in Memphis

Okay, so last night, I'm at the Chuckle House Comedy Club in Cordova, TN.  It's a nice community just east of Memphis.  I've been there before and enjoyed myself immensely, so I took the time to return and see one of my favorite comedians, Earthquake.  It was my first time seeing him in person, so I was excited, but I had no idea that he wasn't the only "performance" I'd witness that night.

The crowd in that club was drunk beyond control!  My first (and probably last) time attending this place on a Friday night.

EQ is a vet, so he handled them like a pro, but I could tell that his patience was tested as he performed.  Let me lay out some things that happened:

You can barely see her on the left in the photo.  She was the catalyst to all of the heckling.  EQ interacts with the crowd during his set.  He'll speak to you or give you some dap just to show love to the audience.  Drunk white lady (and her race has something to do with the story) made a pass at EQ.  He essentially responded that although he could care less about people dating interracially, he prefers black women and had no interest in her.  DWL was offended by this.

Eventually, she stood up in front of the stage and started talking to her friend.  Her friend, who is black and had a big forehead (that's relevant, too), was trying to calm her down.  DWL drew the attention of EQ (because she's standing directly in front of him while he's performing) and he went in on her.  Big time!  Insult after insult.  Referring to her as "Becky" for the duration of the verbal assault.  This infuriated "Becky" who then slumped in her chair, arms folded, staring into space.

The crowd is erupting in laughter as Earthquake is going in on "Becky".  Black friend girl with the big forehead (far right of photo) starts talking to EQ.  She decides that she wants to speak up for her friend and asked EQ for the microphone.  Seriously, BFGBF?  A comedian is going to give you the mic in the middle of a performance?  EQ starts to go in on her and how her eyebrows and hairline are in a civil war and that's why they are so far apart from one another.  Crowd goes wild with laughter again as he starts to go in on BFGBF.  However, during all of the laughing, there is this guy who starts barking.  Not like the old Arsenio Hall "woof, woof, woof", but a deep, hound dog kind of barking.

This guy is well-dressed and sitting directly in front of me.  That's his hat in the photo above.  For those who aren't aware of Que Dogs, they are members of a fraternity found mostly at black colleges/universities.  Omega Psi Phi has many popular members from Shaquille O'Neal to Michael Jordan.  Evidently, this guy, who was drunk, thought EQ would respond to his barks, which is something a lot of Que Dogs acknowledge with a return bark when they hear it.

Well, either EQ isn't a Que Dog or chose not to acknowledge it, because he ignored the barking the first few times it happened.  But, this guy wouldn't stop.  He was barking intermittently just like a hateful dog in your neighborhood who doesn't want you to get any sleep at night.  Every six seconds or so, this dude would bark.  It was the most annoying thing I've ever dealt with in public.  For the last 30 minutes of the show, this guy barked at random.  Even stood up at his table and asked EQ what he wanted to drink and the he would pay for it.

After awhile, EQ asked, "what is going on in Memphis, TN?"  He had a drunk white lady, big forehead black friend girl, a dog, a drunk dude with jheri curl in an Adidas track suit that I didn't mention, and a jealous boyfriend who wouldn't let EQ shake his girlfriend's hand, and a black lady who sat behind me who spewed racist hate at "Becky" all evening.  All of this in less than an hour.

Now, don't get me wrong.  It was an enjoyable show, but I truly wish that I could have heard all of it.  I don't think that EQ even got to do the last 15 minutes of his set because of the rowdiness of the crowd.  Even the bouncer had to get involved and threatened to throw people out.

I know that this blog post comes off erratic and random, and I'm sorry for that, but this is a case where you truly had to be there.  It would probably take me an hour just to lay out and explain all that I saw and heard last night.  EQ did his thing and handled the crowd masterfully and still made the night funny.  But, after this weekend, I don't think that he will ever come back to this venue in Memphis because he had his hands full.
at 6:02 PM No comments:
Email ThisBlogThis!Share to TwitterShare to FacebookShare to Pinterest
Labels: club, comedy, crowd, drunk, earthquake, memphis, rowdy
undefined Southaven, MS, USA

Learn The Difference Between "Respectful" and "Fake" 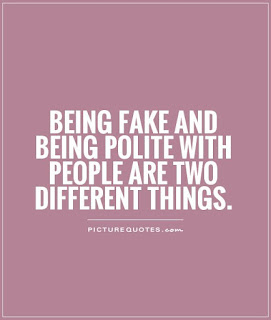 At one time in society, people used to be aware of their audience before they spoke.  They chose their words wisely because they cared about their reputation and they didn't want to offend certain groups.  Men would not curse if women or kids around.  Now women curse just as much as men do now.  Kids do a healthy share of cursing, too.

I discussed that recently to someone (not a Millenial) who responded to me by saying "people who hold their tongues are 'fake'".

Yes, that's right.  People who choose their words around others are "fake" in her eyes.  She explained how everyone in her family curses freely around one another.  It doesn't matter the age, if you are in the room, then you may hear a curse word.  Just deal with it.  Not speaking freely is being fake?  That was the craziest thing I'd ever heard.  Why is showing restraint a bad thing?

Don't get me wrong.  What a person does in their home is their business.  But, some people do it no matter where they are.  At the grocery store, at restaurants, in other people's homes.

There's a time and a place for everything.  You don't drop f-bombs in your boss's office.  Why?
Because it's considered as being disrespectful in the workplace.  No one unleashes curse words when speaking to the preacher at church.  Why?  Because it's a sign of disrespect.  Or in her eyes, it's being fake, I guess.

So, why do people look at you sideways when you ask them not to curse in public?  Is it that hard not to curse?

We keep making excuses for doing what we want to do.  At some point in society, there will be no rules or standards.
at 8:19 PM 2 comments:
Email ThisBlogThis!Share to TwitterShare to FacebookShare to Pinterest
Labels: children, fake, morals, parenting, society
undefined Jackson, MS, USA
Newer Posts Older Posts Home
Subscribe to: Posts (Atom)