Why Was "Hidden Figures" Not in My History Books? 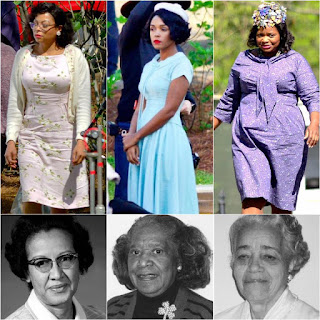 I finally took the opportunity to watch the movie "Hidden Figures".  It's a movie, based on a true story, that follows the lives of three women, who lived in Virginia, who were key components in the success of the NASA space program in the 60's.  Not only was working in prominent roles at NASA a rarity for women, these women were also black, which makes it even more of a phenomenon for the early 60's.  As I watched this movie, my heart swelled with pride to see these black women blaze the trail for many others to come.

Well, maybe they blazed a trail locally.  Because I don't recall ever hearing these ladies mentioned in my history books.  12 years of school and NASA's space program didn't mention one woman until Sally Ride.  Where were the names of Katherine G. Johnson, Dorothy Vaughan, and Mary Jackson?  These women were part of the reason we ever got an American into space at all and they can't get any love in history books?

What would it have meant to thousands of young, black kids, especially girls, across the country to know the accomplishments of these three ladies?  Let me retract that.  There were actually as many as 30 black women who worked for NASA during the first orbit around Earth.  They were referred to as "computers" because of the type of work that they did.  Either the state of Virginia has a surplus of super-intelligent black women or the school system has done us a disservice of informing us of minority accomplishments.  I'll go with the latter.

This movie showed how black people were able to overcome the mistreatment that they received while still outperforming their white counterparts.  Something that a lot of us still deal with today.  We've all heard the phrase, "you have to work twice as hard to get half of what they got."  This movie is a prime example of that.

I would encourage anyone to watch this movie.  It doesn't matter your race or gender.  It's something that everyone can get something out of.  What these ladies did should have been celebrated since the launch and should be a part of American History and not just NASA's history.  Yet it took 44 years of my life to even hear about this story.

And it makes me wonder how many Native Americans, Asians, Latinos, etc. have been left out of the history books, too.  I guess we'll never truly know, but thanks to director, Theodore Melfi, for telling this story.  It's a shame that only one of the three ladies involved was actually alive to see it.