You Can Pull For Sha'Carri And Criticize Her, Too 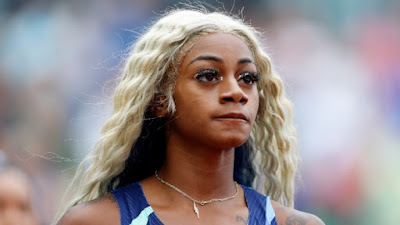 The one thing about social media that a lot of us absolutely hate is that it makes people think that they have to choose a side.

It's perfectly okay to fall in the middle on things.  In fact, most of the times, that's the best place to be on most topics.  In a lot of arguments, there is truth and good points being made on both sides.  It's just a shame that our emotions drown all of that out and we leave so many debates without learning a single thing.

I'm a fan of Sha'Carri Richardson the track star.  Despite her flamboyant hair and nails and her brash attitude, I'm good with her.  I grew up on Muhammad Ali's trash-talking and got to enjoy Florence Griffith-Joyner's flashy style as well, so this is nothing new to my world.  Bravado makes sporting events that much more interesting to me.

Having said all of that, I was one of the people who criticized Sha'Carri for her last place 100m finish in the 2021 Prefontaine Classic.  Of course, a lot of people were upset with me because I didn't support a "black woman" who had a bad day.  A lot of those people probably don't watch sports very much, so their opinions are not necessarily informed ones.  It doesn't mean that they can't have opinions and that I can't learn from them, but I think that they were coming from an emotional place and not an informed one.  So, allow me to lend some context to the hype that built up to Saturday's disaster for Sha'Carri:

Just about everyone who is aware of who she is knows that she was suspended from the Olympics for testing positive for marijuana.  It was a very unfortunate situation, but she was dealing with so much at the time with the death of her biological mom.  I think that she was just trying to cope and got caught, but I thought that she handled her interviews on the morning talk show circuits very well and I looked forward to her return to competition after the Olympics.

Once I saw the first Prefontaine Classic commercial on TV, I got excited to see that she would finally get a chance to race against members of the Jamaican team which has been dominant in sprinting events for years.  Then a few hours later, I came across a video Sha'Carri posted showing the new blonde hair and a quote that said that she's "not playing nice".

Wait. What?  You're calling out the Jamaicans unprovoked?  Why?

Let's put some things in perspective here: Sha'Carri's official fastest time ever is slower than the fastest times that two of the Jamaican women have posted.  She essentially trash-talked women she's officially never run a faster time than.  That's like a boxer who has had 5 fights calling out Floyd Mayweather who is undefeated in 50 fights.  Yeah, there's a chance that you could win, but...

Again, I love trash-talking.  It hypes things up and makes the event that much more attractive.  In fact, I wouldn't be surprised if the ratings for the Prefontaine Classic were higher than the Olympics just from Sha'Carri's presence.  Everyone wanted to see what would happen.

I expected her to finish 3rd or 4th, but by no means did I ever think that she would finish dead-last.  Sha'Carri indirectly challenged the Olympic gold, silver and bronze medal winners into a metaphoric boxing match and her last place finish was the equivalent of a boxer tripping and falling on the way into the ring and knocking themselves out.  With that comes criticism, but it doesn't mean that everyone who criticizes her hates her.  The two are not mutually exclusive despite what so many believe.

We just expected her performance to match her bragging, that's all.

But a lot of her critics got fuel for their fire after hearing her interview afterwards and argued that it was a worse performance than her race.  She was clearly upset (which was understandable) and cursed on national broadcast television.  She defended her poor performance by touting her previous events and saying things like, "you know what I'm capable of".

No, not really.  Not yet.  Dominating in college is much different from dominating as a pro against world opponents.

None of the eight ladies who finished ahead of Sha'Carri were critical of her in their post-race interviews.  In fact, the Jamaican ladies who finished 1-2-3 wouldn't even comment on her when given a chance to rub it in Sha'Carri's face.  Why aren't they not getting any credit for being gracious winners?

Some people on Facebook were saying, "when's the last time you ran a 100m race?".  Uh, never.  But that's kind of an immature argument when you consider that most of us criticize things we've never done.  How many of us have opinions on politicians, but have never run a branch of government?

Others came at me on Facebook saying that I criticized a black woman and that was foul.  I'm not sure where the argument of "not supporting a black woman" comes into play when every woman in the event was a woman of color.  Criticism of a braggadocious behavior knows no color.  Sha'Carri can't sell wolf tickets and then be surprised when wolves show up.

It's unfortunate that this was the time she ran one of her worst races as a professional.   We all have bad days and don't perform well at something, but we're fortunate that it's not usually on a national stage.  However, here comes the "but"...  Sha'Carri made the spotlight even brighter by putting her confidence on display for the world to see prior to the event.  She did some things that could be deemed as being disrespectful to her opponents and that comes with a price if you can't back it up.

I remember when Muhammad Ali lost to Leon Spinks in the late 70's.  It was a devastating and humiliating loss for him, but he bounced back.  And that's what made Ali so great.  He always bounced back from a defeat. 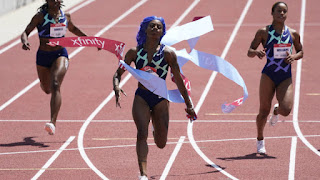 I think that Sha'Carri will, too.  I fully expect her to be a medalist in the 2024 Summer Olympic games in Paris.  I also expect her to be much more competitive in the next match up against Jamaican runners.  She just needs to mentality get back in the game and the improvements will happen.  She was the second-youngest person in the event, so her ceiling is still high.

I will continue to pull for her, but if she runs her mouth and doesn't back it up, I'll continue to criticize her for it as well.  Because we all need to held accountable for what we say and do.  Unfortunately, most people on social media don't understand that which makes them incapable of separating someone's actions from the fact that they personally like the person.

Not that it matters, but let me first start off by offering a disclaimer: by no means do I want to sound insensitive in discussing this.
Athletes are different these days. Well, people overall are different because the athletic world is just a microcosm of society.  However, the greatest gymnast I've seen in my lifetime is not participating on the highest stage and it's disappointing. The reason doesn't matter. 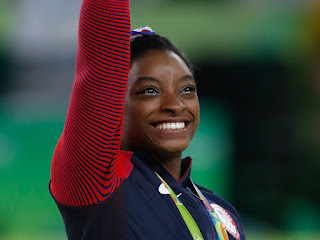 Regardless if it would have been due to a physical injury or something of that nature, to not see the best at a competition not perform in a once-every-four-year event is disappointing.  It's like listening to Phil Collins performing "In The Air Tonight" and your power cuts off on your sound system before the drums can kick in.  All that build up with no conclusion.
And I feel let down because this is all new to me in the world of sports.  I'm from a generation when athletes stood out because they "found a way" to compete on the biggest stages despite the pressure or pain that came along with it.
Muhammad Ali is considered the Greatest of All-Time by many boxing fans, but he lost 5 times in his career.  Serena Williams is considered the GOAT of the tennis world, but she's lost in a major event championship 10 times in her career.  So, they're simply not great because they won a lot.  They're great because they continued to come back after a loss.
Whatever athletes like Simone, Naomi Osaka, Kyrie Irving and others may be going through, I hope that they can work through it.  How I feel is inconsequential to them, as it should be.  The media is tough and social media critics are relentless.  I'll never know the pressure they may feel just for being who they are.  But I will say this:
It's okay to lose.
We need to instill that mindset into younger people sooner rather than later.  What made Ali the greatest boxer of all-time to me is not that he won a heavyweight championship.  It was the fact that he lost the championship belt multiple times yet continued to fight until he won it back.  His perseverance is what made him the GOAT in my opinion.  The same goes for Serena.
Something needs to change.  We need to say "no" to participation trophies.  No more celebrating someone's presence as being enough.  We have to teach people how to take an "L" and be okay with it because no matter what you do in life, failure is going to rear its ugly head multiple times.  You will lose at something.
The word "life" even starts with an "L"!
We all go through things in life that a lot of people may not be aware of at the time.  And although it sounds like I'm bashing Simone, I'm really not.  I don't blame her one bit in this because I truly don't know what she's going through.  Her story isn't done yet.  She's still the greatest gymnast I've ever seen and I hope that she has a comeback story like an Ali or Serena.
It's the system that I hate.  I question the system that has been in place for at least a generation that says "not participating" is the route you take when things get hard instead of a focus on helping people cope prior to getting to that point.
at 9:35 AM 2 comments:
Email ThisBlogThis!Share to TwitterShare to FacebookShare to Pinterest
Labels: criticism, did Simone Biles quit, GOAT, gymnastics, media, mental health, pressure, sports, summer olympics, Tokyo Olympics

The Recipe For Successful Dating

How do you date successfully? See what Dr. Tiffany Anderson, Marrie Lobel, Suzie and André have to contribute on the discussion. Hopefully you will learn to ask the right questions after hearing them give their two cents!
at 7:20 AM No comments:
Email ThisBlogThis!Share to TwitterShare to FacebookShare to Pinterest
Labels: counseling, dating, DatingAdvice, how to date, relationships, t2q, youtube, yt live
Older Posts Home
Subscribe to: Posts (Atom)