As you know, I recently hit the 100 follower mark. People from multiple backgrounds around the globe fill that list and it feels great to interact with them all. It's a feeling that I welcome because I wasn't able to experience as a kid.

I enjoy meeting people from different backgrounds. I'm not just talking about someone who may have grown up in the "deep country" or in the "big city". I'm talking about people who have immediate roots in foreign countries.

Growing up in Mississippi, pretty much everything in my school was black and white. Literally. We had roughly eight Hispanics, maybe two Asians and one Indian. I was vice president of our high school Spanish Club, so I knew most of the Hispanics. I had a class with the Indian, Pratop, who was fascinated by blondes and saw little-to-no time to hang out with the likes of my crew. I didn't know either of the Asians classmates while in school, but later met one of them a decade later in a nightclub when she recognized me. My knowledge of her barely went past a brief conversation that night.

So, pretty much through all of my youth, everyone I came in contact with daily was either black or white. I never got a chance to embrace different cultures until much later in life as I got into the workplace. Over time, I got to travel and I met and established friendships with my first Asian, Russian, German, etc. Now I have a melting pot of associates and the blogging world has extended that opportunity even more. 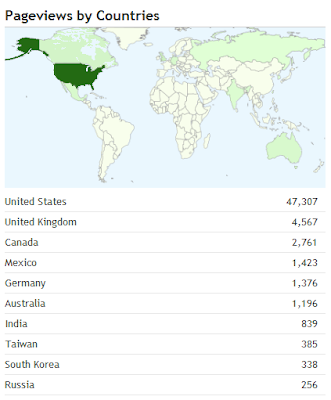 I've interacted with people from all over the world and I would just like to say "thanks." From Paula in Germany or Alice X in England to my Cuban-born blogging inspiration, Annah.

So, regardless if you're a Ukrainian-Canadian redhead named Cherie living on the west coast or a black, Mississippi educator sharing my home state like Diana, then I have much love for you!


If you're one of my readers from out of the country, please say "hello" in the comments below! I'd love to hear from you and find out how you found the blog.
at 3:41 PM
Email ThisBlogThis!Share to TwitterShare to FacebookShare to Pinterest
Labels: blog stalking, diversity, race, red means go