Let Me See You Slutwalk 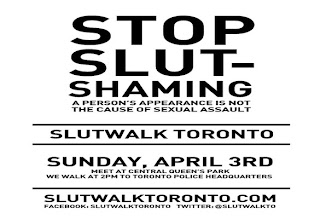 Let me see you Slutwalk! Do you know how? It's not hard. It helps to have the body and the attitude.

Okay, okay... no, this isn't the newest dance craze. Slutwalking is actually bringing an awareness to something serious, but at what cost?

This all started when a Toronto police officer said that if women stopped dressing like sluts, then they will less likely be the victims of sexual assault and / or rape. That raised the eyebrows of some people who said that the police were placing blame on the victim. So, in order to raise awareness to people "expressing themselves sexually in a healthy way," they broke out the "I Love Sluts" and "Sluts Pay Taxes" t-shirts and danced to hip-hop in the streets. Some even rollerskated around in lingerie.  Now Slutwalk events are being planned all over the world.

Over 2,300 people have already committed to attend a future Slutwalk event in Boston and another 2,000 committed for Seattle as the event has blown up on Twitter and Facebook. Of course you have groups who disagree as well. There was a "Pimp Walk" organized in Boston for the same day. I guess they thought they would hand out applications to new recruits.

But, my question to you is:

How can you take something seriously if it requires shock value to get your attention?


or
"Let's raise awareness to drug prevention by snorting a wheelbarrow of cocaine!"

Sounds counterproductive to me not to mention that plenty of pervs will certainly attend these Slutwalks just to glance at some butt cheeks.

I understand the movement. No victim of a sex crime should feel they are at fault. That's part of the reason a lot of them won't come forward. But, dressing provocatively is the answer? I don't think so. People who commit sex crimes have a loose screw. So, if you know they're out there in the world, then why tempt them? I wouldn't wear pork chop underwear and stand in front of a bipolar dog expecting him to appreciate "my healthy expression." 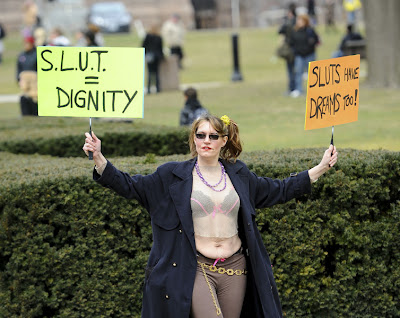 Call it what it is. You're not raising awareness, you're looking for acceptance. You're taking a serious issue and turning into a movement that benefits your desire to dress however you like. I think people are too extreme now. There's always a middle ground, but no one wishes to take it. You're either far Left or you're far Right. You're either hot or cold. You either have Beiber Fever or dreams of kidnapping him. What's wrong with balance? Common sense is about balance. Common sense doesn't offend anyone and is fair to everyone. Let's use it now and then! 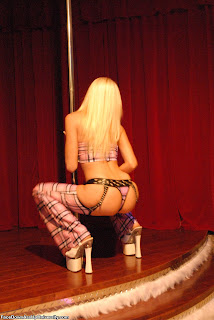 And you're proud?
at 5:53 PM
Email ThisBlogThis!Share to TwitterShare to FacebookShare to Pinterest
Labels: common sense, sexy, slutwalk