Why Do We Need A Blackout Day? 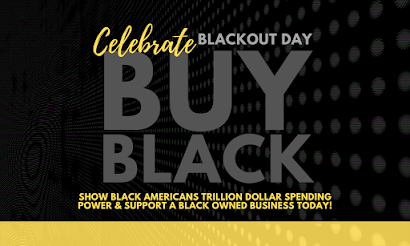 Okay, so I talked to a friend of mine named TeAndra a while back and she brought something up in our conversation that I hadn't thought about before.  Why do we have to have designated days to support black-owned business?
I think back to stories from the 50's and 60's that my father shared with me years ago.  He said that every weekend, black people would frequent a spot in Jackson, MS in an area now known as the Farish Street District.  Farish Street was a black community and there were a lot of black shops and restaurants in that area.  That area thrived from the black dollars that went into it.
Fast forward to after the Civil Rights Era.  No more colored water fountains.  No more colored-only entrances.  All of that stuff abolished.  And that was the origin of the collapsing of black businesses in the Jackson area.  Black people started taking their business to white establishments and ultimately stopped patronizing their own.  That area of Jackson has been struggling ever since it can't seem to come close to recapturing what it once had.
Now, if you fast forward to present day, we have what some people call "black out days".  We use black businesses so infrequently now that we have to remind the world to take a day to patronize a black-owned business.
How sad is that?  Why do we not support our own.  And don't get me wrong, I'm not saying that black people should not support people of other races, I'm just trying to figure out why we appear to be the only race of people who don't keep our dollars within our communities.
We approach black businesses in one or two ways: 1) we want some sort of hook up or discount.  And 2) we have a zero tolerance for anything that we interpret as bad customer service.
C'mon, people.  Let's stop being stuck on stupid.  There's a reason why you've heard of different parts of major cities devoted to certain ethnic groups.  You've heard of Chinatown, Little Italy, and things of that nature.  Why isn't there a well-known community in every major city predominantly serviced by black-owned businesses?  I ain't never heard of Blacktown.
Well, that might be offensive to some, but the point I'm trying to make is: stop being on a short fuse when it come to black-owned businesses.  There are a lot of professional people out here who just want to make a living like everyone else, but they can't do it because your expectations of them is unreasonable.  Give them the same level of patience you give the rest of the world.
We still go to fast food restaurant chains regularly and put up with bad attitudes from the moment we place our orders.  We still go to big box superstores with 20 registers and only 2 of them are open and will sit in line long enough to play out all of your Candy Crush lives.  But let a black-owned business be 1 minute late or forget to take the tomatoes off of your hamburger order and it's, "man, I can't stand black folks.  They don't do anything right!  I ain't ever coming back!"
Is that how you really feel?  SMH.
at 7:00 AM
Email ThisBlogThis!Share to TwitterShare to FacebookShare to Pinterest
Labels: black-owned businesses, blackout day, buy black, Desegregation, Farish Street District, history, Jackson, mississippi, support