Pick A Bale Of Cotton 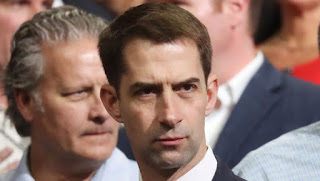 Sometimes these blog posts just writes themselves.  An Arkansas senator named Tom Cotton said that slavery was a "necessary evil".  Well, unlike our American History books, to put things into context, he said that, "As the Founding Fathers said, it was the necessary evil on which the union was built."

This conversation came up during an interview about how slavery should be taught in schools.  Cotton wants to cut funding for schools who use curriculum from the "1619 Project".

You don't have to be a history major to know that a lot of foul stuff was happening to black people in the 1600's.  That project was created to help students understand how this country was built on the backs of slaves.  It's a painful story to tell, but it does help to enlighten those who know very little about how this country came to be what it is today.  In no way, shape, or form is murdering, beating, and raping a group of people a "necessary evil".  It's evil, but it's very unnecessary.  I don't care in what context you attempt to use it.  However, he later said on Twitter that he wasn't endorsing the Founding Fathers stance on slavery.  Blah, blah, blah.  Cotton also made quotes that insinuated that despite America being a flawed country, it is a great country and he doesn't want it portrayed as being formed by a bunch of greedy, racists crooks.

And this is a huge problem that I have with American History school books.  They are incomplete.  They don't tell the real story of how this country came to be.  The treatment received by minorities would bring about a ton of shame onto a lot of prominent people.  Especially if names were mentioned.

Case in point, Senator Cotton is a descendant of slave owners.  There are documents floating around online now that show a will from his great-great-great-great (I'm unsure of how many "greats") grandfather leaving slaves to an heir.  So, I'm guessing that having to explain that part of history is not something he's wanting to get into.  In fact, I'm sure that a lot of surnames of prominent people would come up if we did a deep dive into the origin of slave owners.  There are a lot of rich people in this country who had wealth passed down to them from those who made it off of the backs of treacherous acts.

It's ironic that a man with the last name of "Cotton" has a problem with how slavery is taught in schools.  History should be no longer "white-washed" to tell "his story".  It should be told in its entirety so that people can begin to understand how "The Greatest Country in the World" has a lumpy carpet from the things being swept under the rug.
at 10:55 AM
Email ThisBlogThis!Share to TwitterShare to FacebookShare to Pinterest
Labels: american history, Arkansas, black, Founding Fathers, history, politics, racism, racism in america, schools, senator, slavery in America, Tom Cotton
undefined Ridgeland, MS, USA